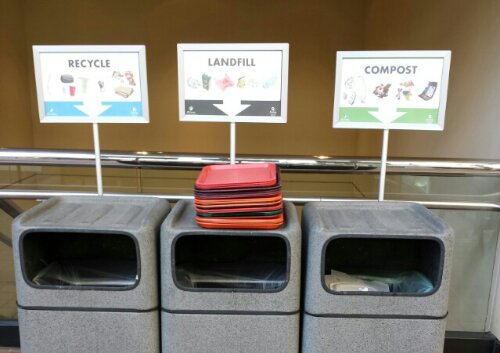 In the old days, trash was trash and as long as it wasn’t cluttering the place up, you didn’t worry so much about where it was going. These days we’re more aware. In the LA/OC area, you can often get residential recycling (and sometimes green waste for compost) along with your trash pickup, and malls and other areas often have bins for aluminum cans and glass/plastic bottles.

San Francisco goes a step further, with not just trash and cans/bottles, but trash, recycling (all), and compost. More importantly, they’re labeling the “plain” trash as landfill. It makes you think about where the trash is going, and a bit more likely to separate it so that things are a bit less messy and wasteful in the long run.

But for the short term, it really takes a while to figure out which bin to put your trash in.

The post I Left my Trash in San Francisco appeared first on K-Squared Ramblings.