Measles making comeback as parents opt out of vaccines

I do not care whether or not you believe vaccines cause autism. Even though studies have shown time and time again that vaccines don’t cause autism and the original study stating that there was a link with autism and vaccines was fraudulent, it does not matter.

There are children who are too young to get vaccines. There are kids who have compromised immune systems that cannot get vaccines. Your child getting vaccinated prevents these illnesses from spreading and keeps those children safe. It’s called community immunity and it’s important to maintain that so people don’t die.

tl;dr – Stop being a selfish asshole and get your kids vaccinated. There are worse things in the world than autism.

And before anyone starts coming to my inbox screaming about how “I don’t know how bad autism can be”, I know. Not only do I have a neurodevelopmental disorder, but I also had a friend with a severely autistic brother that could not talk when he was fifteen. I know. And even after witnessing him and being through my own shit, I would still get my kids vaccinated because I want them, and other kids, to live.

Why the fuck do you think that your fear of autism (ungrounded, btw), beats someone else’s RIGHT TO LIVE?!?!

You don’t want to vaccinate your kid. Goody gumdrops.

You expose your godchild – who’s too young to be vaccinated.

You expose your sister-in-law – who is going through chemo (because having cancer isn’t bad enough), and immunocompromised.

You expose everyone they come in contact with – BECAUSE MEASLES STAYS ACTIVE FOR UP TO TWO HOURS ON SURFACES AND IN THE AIR OF A SPACE.

Number of people killed by symptoms associated with autism diagnoses: 0.

Number of people killed per annum before vaccination became widespread in 1980: 2,600,000 (paraphrased from WHO).

Measles is not harmless. Researchers noticed that after the measles vaccine came out, kids started dying less from other diseases as well. It turns out that measles suppresses your immune system for YEARS (and no, no amount of vitamin C or zinc is going to make up for that).

Source (on mobile so these are going to be ugly links) NPR article (easier reading, you don’t have to be a scientist): http://www.npr.org/sections/goatsandsoda/2015/05/07/404963436/scientists-crack-a-50-year-old-mystery-about-the-measles-vaccine
Article in Science (a very highly ranked journal): http://science.sciencemag.org/content/348/6235/694 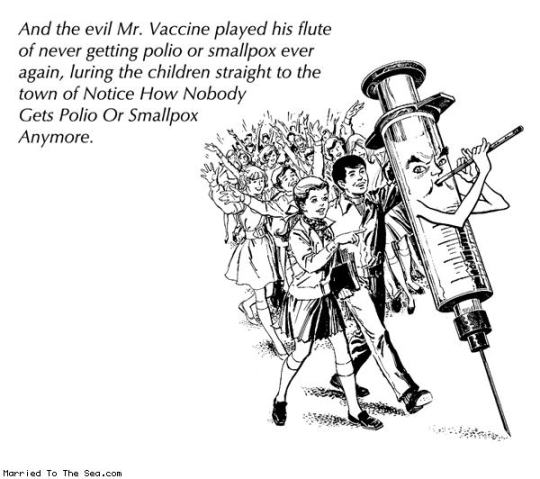 Re blogging for the cartoon tho omfg

the only deaths from autism are when people murder us because they think we’re not real humans.

the fact that people think it’s better to be dead than be me would give me schadenfreude if they were the ones dying, but they’re killing children instead.

funny how ableism seems to keep resulting in dead kids.

Some science links to add to what has been said.
Vaccinations do not cause autism. Anti-vaxxers cause deaths.
http://lysikan.tumblr.com/post/143673098250/vaccinations