What stands out the most for me about the 2000 TV adaptation of Les Misérables are the unusual character choices and the strong presence of the Thénardier family as a real menace. I wanted to like it a lot more than I did, but there’s still enough there that I’d like to see the longer, French version sometime. Characters John Malkovich plays Javert as very matter-of-fact, almost bored. Rather…

The 1952 version of Les Misérables is an odd one. It’s a decent movie overall, though none of the cast really made an impression. Elsa Lanchester is the only name that I can remember without looking it up, and she’s in a tiny role. The cinematography is good: Except for the opening scene at Valjean’s trial, everything has a strong sense of being part of an actual, lived-in place, with people… I quite liked Richard Boleslawski’s 1935 movie of Les Misérables starring Charles Laughton as Javert and Frederic March as Jean Valjean. Like the 1978 version it focuses heavily on Valjean vs. Javert, starting with Valjean’s trial. But you get just enough of the other characters like the students (and even the bishop) to make them seem real. It feels like their stories are intersecting instead of…

Fortunately, Les Miserables was translated by an actual lyricist and not by Google Translate.

(Her alternate version of “One Day More” – or should I say “Extra Day” – is great too.) The Manga Classics adaptation of Les Misérables turns out to be a surprisingly faithful adaptation of the novel. Very little is altered except for streamlining, and a lot more is included than I was expecting. Art It’s a modern adaptation in manga style. SunNeko Lee makes some really interesting choices with her character designs, taking different stylistic approaches with each. Valjean and…

“How Could I Ever Know?”
“Castle on a Cloud”
“Someone Else’s Story”
“I Know Him So Well”
“I’m Not That Girl”
“You Must Love Me”
“Wishing You Were Somehow Here Again”

Good grief, is there anything HAPPY on this playlist?

We have One Day More than usual this year.

I recently dug out my recordings of Chess and listened to them extensively. With Judy Kuhn playing Florence on the Broadway version, I found myself comparing the roles of Florence and Cosette. Florence in Chess is a much more complex character than the Cosette we see in the musical of Les Misérables. While it’s true that Florence is defined mainly through her relationships with men — her missing…

Agency: Cosette vs. Éponine vs. Florence

Classics Illustrated redid their Les Misérables comic in 1961. I found a copy of the original. (Review) The Les Misérables comic book that you can read digitally isn’t the first adaptation Classics Illustrated did. It’s a completely new adaptation done in 1961 as the older art style had fallen out of favor. I found a copy of the original 1943 adaptation on eBay, and I’m actually quite impressed. The storytelling works a lot better than the later adaptation for one simple reason: Instead of trying… 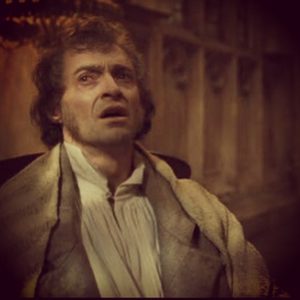 one of the enduring legacies of the extreme physical training hugh jackman had to do for “x-men: days of future past” is his portrayal of jean valjean as the world’s most jacked dying old guy.

To be fair, up until his rapid decline at the end of the story, Valjean is known for his incredible strength. (Cart incident, lifting the sewer grate, etc.)

A few days ago I was looking through a cabinet and stumbled on a set of audio cassettes featuring Orson Welles’ 1937 radio adaptation of Les Misérables. Since I’ve only got one cassette player left (and I’m not sure it works), I went looking for a place to buy it online. It turns out that Archive.org has the whole thingin their Old Time Radio collection: Seven episodes, half an hour…

It’s been a year since I completed my re-read of Victor Hugo’s epic. In that time this blog has found a small niche, and I’ve even found new things to write about so it hasn’t completely stagnated.

Mainly, I’ve been reviewing adaptations of the book. I re-watched the movie of the musical with a new perspective. I tracked down the 1978 film with Richard Jordan and Anthony Perkins and the 1998… Last year, a friend gave me this Les Misérables adaptation by Jack Wang & Holman Wang for Christmas, along with a version of Moby Dick. Well, ostensibly they were for my son, who was three years old at the time. Cozy Classics is an odd idea, but an appealing one to someone with a geeky disposition, an interest in literature, and kids.

It’s a board book, and it brings “abridged” to a whole new…

A Visit to Thénardier’s Inn, a local theater’s cabaret-style parody of Les Misérables. A local theater company put together a cabaret-style parody of Les Misérables, built around the idea that you were visiting Thénardier’s inn for drinks. “Witness the heartwarming tale of human compassion, told by a complete a—hole.” It’s the kind of event where the doors open early and the actors are already in character, milling about and interacting with the audience, feeling out who’ll be a…

A Visit to Thénardier’s Inn, a local theater’s cabaret-style parody of Les Misérables.

A Visit to Thénardier’s Inn 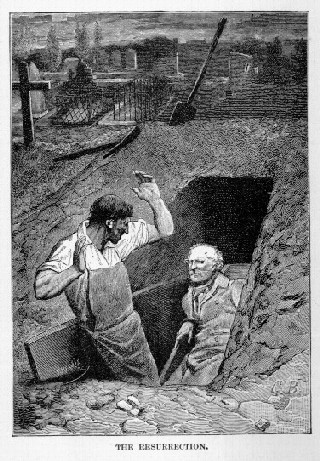 Fauchelevent comes up with a great cover story to get Valjean to join him as assistant gardener and enroll Cosette in the convent school. Only one problem: they have to come in through the front door. He can sneak Cosette out in a basket, but a grown man?

Meanwhile, he’s also trying to figure out how to get an empty coffin out of the grounds, since the convent is defying city regulations to bury their dead on-site. How can he POSSIBLY solve these two problems?

What follows is a surprising example of gallows humor. It was around here that I started really noticing Hugo’s dry wit, and it’s actually quite funny to watch the plan fall apart as one thing goes wrong after another.  The grave digger Fauchelevent had planned to get drunk so he could sneak Valjean out of the coffin turns out to be dead. The new guy? Teetotaler.  Hugo has fun with his quirks: a failed writer who still works as a scribe for illiterate clients. Love letters by day, graves by night…

That time Jean Valjean was buried alive in a coffin. Reblogging for Halloween.

I am the night

While reading Les Miserables this time through, I came up with this joke theory that Claquesous was a vampire. As introduced, he only ever appears at night, and no one ever sees him without a mask. I joked that it was to hide fangs.

Then after the gang is arrested, he disappears on the way to… 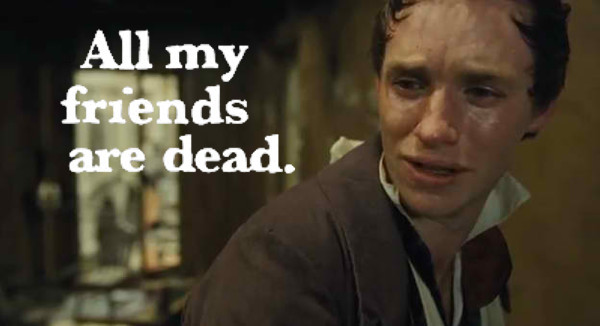 After the wedding, Cosette starts spending time with “new acquaintances brought to her by marriage.” Who? All of Marius’ friends are dead. I don’t remember why I never got around to watching the 1998 Les Misérables movie before — I was heavily into the musical at the time it was released (even subscribing to a fan newsletter and running my own fan website), and I was certainly aware of the film. It may have simply been a matter of “it’s not the musical” (or possibly “Eponine isn’t in it”).

Whatever the reason, I never got around to…

It’s funny how “24601″ is such a powerful refrain in the musical of Les Misérables, but is barely mentioned in the book. But there is another nickname* that does keep coming up over and over: The Lark, a name given to little Cosette by the people of Montfermeil.

She was known locally as l’Alouette, the Lark. The village people, with instinctive symbolism, had thought it a suitable name for the apprehensive, trembling little creature, scarcely more than a bird, who was always first up in that house and out of doors before dawn. But this was a lark that never sang.

Years later the Thénardiers mention it while Marius is listening in, which is how he learns something he can call her. In his despair over being unable to find her, Marius wanders into a field that catches his eye, and then discovers it’s called the Field of the Lark. Of course it must be a sign, so he starts spending all his time there.**

Hugo even compares her to a lark in the narrator’s voice when describing her sense of adventure, and why she doesn’t spook as much as one might expect when Marius starts creeping around the garden.

Cosette was not nervous by nature. There was gipsy blood in her veins, that of a barefooted adventuress. We may recall that she was more like a lark than a dove. She had a wild but courageous heart.

The fact that the book keeps coming back to it makes me wonder why the musical dropped it. It’s a great character hook, especially with the songbird angle. Though given the similar vocal profiles and isolated-damsel-in-the-city roles, maybe they wanted to distance her from Johanna in Sweeny Todd, whose signature song is actually about songbirds.

*Not counting the zillions of aliases, or the nicknames given to passers-by, or nicknames that characters actually go by. Like, for instance, Cosette, whose real name is Euphrasie.

**As it turns out, it’s a good thing he does, because that’s how Éponine finally finds him after she discovers where Cosette lives.