Gotta love when someone freaks out over something that’s been CHANGED OMG! when it’s actually normal & they just hadn’t noticed.

For example: “President A skipped out on event B for the first time EVER!” even though presidents C,D, and E skipped it regularly…

The airplane contrail off of the Calif. coast that people mistook for a missile launch a couple of years back…

Or those Youtube videos where the narrator was sure something had been done to water because you NEVER saw rainbows in sprinklers before?

“Doctor, will I be able to play the violin after the operation?” “Absolutely.” “Wonderful, I never could before!”

I think I found the problem… #fitness #icecream #oops 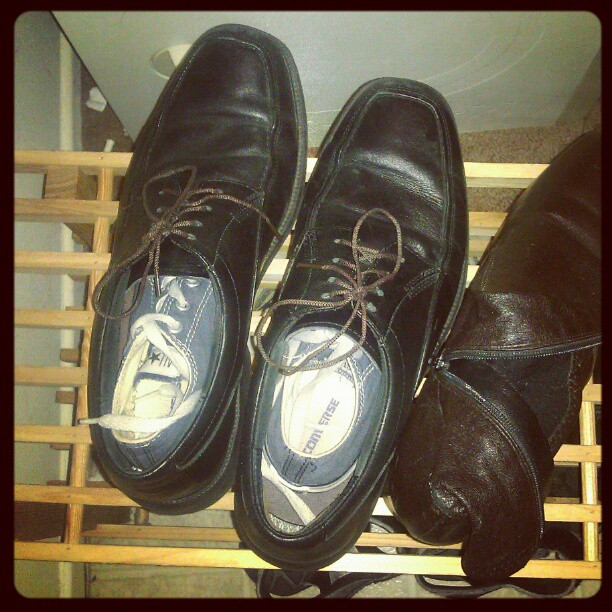 Having a toddler around is like camping: you always need to check inside your shoes before you put them on. 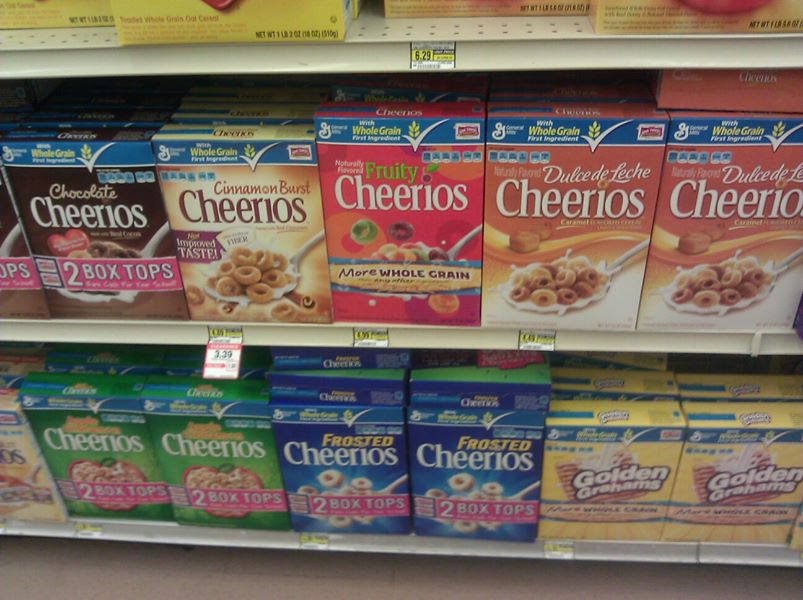 Remember when Cheerios were healthy?

I suppose it’s silly, but after thinking about it for a bit, what really bothers me about the Lucasfilm/Disney deal is that by continuing the movie series with Episodes 7-9, they are undermining the distinction between the Star Wars *saga* and the Star Wars *franchise*.

“DC One Million” is a Justice League story that spans 800,000 years. It was a big event, but there’s a collection that features the main story and the key tie-ins.

“JLA: Rock of Ages” is another Justice League time travel story. Grant Morrison revisited some of the same ground later on with Final Crisis, but IMO Rock of Ages hangs together better. Edit: In Rock of Ages, several members of the League jump forward in time a decade or so and find that Darkseid has conquered Earth.

“Time Masters” from ~1990 is a good stand-alone story featuring Rip Hunter. (Not to be confused with Time Masters: Vanishing Point – I haven’t read that one, but as I understand it was built around Batman: Return of Bruce Wayne and Flashpoint.) It was reprinted a few years ago, so you should be able to find it. It’s a time travel conspiracy story with the modern team of time travelers trying to block Vandal Savage and the Illuminati in different periods of history.

I rather liked the short-lived series “Chronos,” about an industrial spy who stumbles into becoming a time traveler. It only lasted around 10 issues or so. Another short-lived series, Hourman, was about a time-traveling android and spun out of DC One Million.

I get the impression that they tried to be Pinterest and then realized that they couldn’t keep up, and figured it would be better to focus on their strenghts than be a third-rate Pinterest clone.

The fact that they added Facebook integration at the same time as announcing the cancellation of stacks suggests that they’re aiming to be a repository for link sharing on other social services. Searching your Twitter stream or Facebook timeline (or Google+ page, or Tumblr, etc) for a particular link you posted three months ago is a pain. Searching for it on Delicious is…well, at least possible, though it’s better if you take the time to tag your links once in a while.

Actually, while I wrote “Wally” below, I think my biggest disappointment with the New 52 was that they didn’t go far enough.

They had a chance to completely reinvent the DC Universe to an extent that we haven’t seen since the dawn of the Silver Age. Instead, we have the same basic characters: Superman is still Clark Kent, Batman is still Bruce Wayne, Wonder Woman is still Diana, Flash is still Barry Allen, Green Lantern is still Hal Jordan (and John Stewart, and Kyle Rayner, and Guy Gardner), etc.

They could have tried to recapture the sheer creativity that made the Silver Age such a success. (What if instead of a guy with a magic ring, we make him a space cop? What if instead of a small guy who’s really strong, he actually shrinks to microscopic size?) Instead, they tried to recapture the success of the post-Crisis DCU. That’s still ambitious, but it has nowhere near the same level of potential, and I think that’s thrown a wet blanket over the past year.

Wow. I’ve always liked Michael Whelan’s art since I saw his first few Dragonriders of Pern covers, so I might be biased, but he was a great choice to replace the late Darrell K. Sweet on the final volume of The Wheel of Time.

Michael Whelan’s Cover for A Memory of Light Revealed | Tor.com 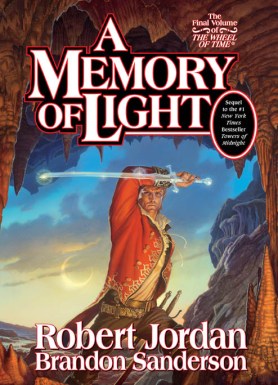 In order to take advantage of that incredible display, you have to put much bigger images on the page.

Want to take advantage of the iPad’s new high-def display? Prepare for web pages as big as 5 MB. via @pingdom

Dreamed it was possible to create ball lightning using a milkshake, in a simple experiment that anyone could do at home. Well, anyone who owned a rail gun, that is. You just had to launch the milkshake with the rail gun… 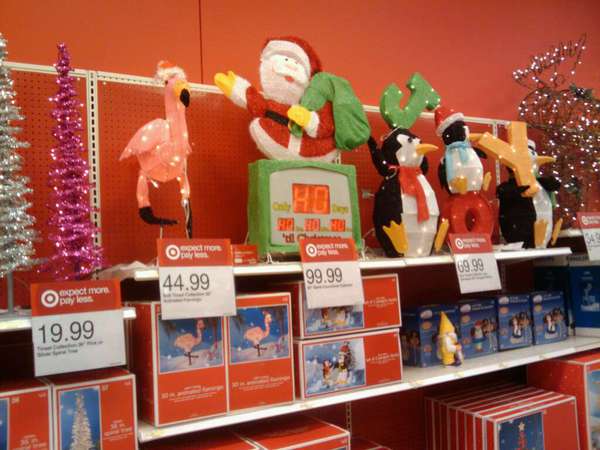 It’s Halloween, so Target has the Christmas decorations up!

There’s an easy way to keep things simple: Either build on earlier stories without changing them (or change only the obscure stuff), or start over.

Retcons are like epicycles, the sort of secondary orbits that astronomers invented to explain discrepancies in planets’ motions when they thought the planets all had circular orbits and revolved around the Earth. The epicycles got more and more complicated until enough people noticed that you could get rid of most of them if you assumed the planets revolved around the Sun. Then they realized that you could get rid of the rest if you assumed the orbits were elliptical instead of circular.

If you *totally* reboot a series, like Wonder Woman after COIE or Legion of Super-Heroes after Zero Hour and again last year, things are simple. It’s just like launching the Justice League cartoon — it’s a totally separate continuity from the previous version, so contradictions aren’t a problem.

When you revise *parts* of history, things get complicated. Wonder Woman herself might have had a simple reboot, but the Justice League and Wonder Girl (Donna Troy) were still around, and their histories had to be revised. Donna has gone through *how* many origins since then? Origin-wise, she’s hardly recognizable. They actually did a better job with Power Girl by saying “Forget all the retcons, she really is the cousin of Earth-2’s Superman”

Sorry about the rant…

On its own merits, Starship Troopers was a passable, somewhat cheesy action/war movie. Nothing fantastic, but not a complete waste of two hours either.

As an adaptation, though, it was terrible. It was as if someone read the back cover, wrote a script, then skimmed through the book to add in salient details in hopes that people who had read it would be happier. (Hey, it says here that the main character comes from Buenos Aires. Let’s add that in!)

A movie *can* be both a good film and a good adaptation. The Lord of the Rings trilogy is a good example. It didn’t stick to the books 100%, but most of what it changed made sense, given the difference between the written word and the moving image. And because it stayed true to the books where it counted most, people who have read them tend to like the movies as much as people who haven’t.

An interesting side note about Starship Troopers: I was actually an extra in the opening scene with the hybrid football/basketball game. They needed spectators, and it was filming nearby (California State University at Long Beach, usually referred to as Cal State Long Beach). It was actually
extremely boring — I assume it’s typical that you spend more time setting up a shot than actually filming it. I spent two days waiting for them to set things up, then cheering or booing for 30 seconds while the cameras rolled, then waiting again. In the end I got: (1) a cast/crew T-Shirt (2) lots of reading time (3) conversations with some interesting people and (4) a girl’s phone number. So it wasn’t a *total* waste of time!

I noticed a lot of you seem to want Savitar to come back. I don’t. Not because he wasn’t a great villain, but because he *was* – and because bringing him back from the dead would cheapen that death and the sacrifice Wally almost made. Likewise, bringing back Barry or Zoom permanently would cheapen Barry’s sacrifice and the tragedy of Zoom’s death (and all the grief Barry went through during his trial). I don’t know how many of you read The Titans currently, but I remember an issue where Starfire is showing Damage and Argent around their HQ and shows them the gallery of fallen Titans – Jericho, Kole, Golden Eagle, etc. “They all came back, right?” one of them (prob. Argent) asks. “I mean they *were* Titans…” And Starfire says, “You *do* know that when people die, they usually don’t come back, right?”

When someone comes back within one story, it makes sense. Terminal Velocity was like that. As someone said on another board, you start with the warning that “no one has ever gone into the Cave of Death and come back alive!” and you know instantly the story has to be about the one person who does come back. It ends up being like Orpheus’ descent into the underworld and his return. Or to pick a more modern example, Sheridan’s death on Z’ha’dum in Babylon 5. But Orpheus only went to the Underworld once, and Sheridan never returned to Z’ha’dum. Wally’s been “lost in the speed force” 3 times so far, and he’s come back every time. He even dove into it to rescue Linda during the Black Flash story. The threat’s gone. I didn’t even take it seriously this last time, at the end of Chain Lightning.

To go back to the Titans for a bit, they were formed to battle Trigon the Terrible, the demonic conqueror of another dimension who had set his sights on ours and who was Raven’s father. They barely defeated him once, and then in the second storyline he was “destroyed forever” by the spirits of the Azarathians. Great story, great conclusion, and we move on. 80 issues later, they do the Dark Raven storyline, and by the end of the series, Trigon is back just long enough to be “destroyed forever” AGAIN. How many times can you destroy someone forever? It makes the original victory hollow.

Resurrection only works for a limited pool of characters (Resurrection Man, Ras al Ghul, maybe a few others), and even then it has to have serious consequences (such as the death of Morpheus the Sandman and his replacement with Daniel – another facet of Dream, but a different persona from the one we’d come to know.)