Remember to vote in local elections. Initiatives, council & school board members, judges, etc. affect you and your community directly even if it’s not as exciting as the Presidential race. And the people elected locally go on to build the pool of state and national candidates. If you care about 2018 or 2020, get out and vote locally to get the ball rolling.

Plus between a smaller pool and a lower turnout, your vote literally makes up a bigger share of the total.

I like to remind people that a candidate I voted for once lost by exactly 17 votes.  Your vote does matter.

Such beautiful scenery, and such a great photo!

Very pretty, and a great shot of it and its surroundings 🙂

Hawthorn tree and halo. (At least I think it’s an Indian Hawthorn. It’s got the same leaves, bark and flowers as the bushes that are all over the place in this area, and Wikipedia says they can be pruned into trees.)

Wow, this is absolutely wonderful.

Gorgeous shot!  Love the way you framed the halo.

You’re supposed to grill the burgers, not the cars.

Great shot!  Really like that you got the smoke, firefighters, and the truck.

Thanks! We were stuck at the front of the left turn lane for a whole signal cycle.. It was pretty much a perfect view.

Wally West is set to appear on the Flash TV Show in this week’s fall finale, so now is the perfect time to look back at how the first meeting of Barry Allen and Wally West has been portrayed over the years. 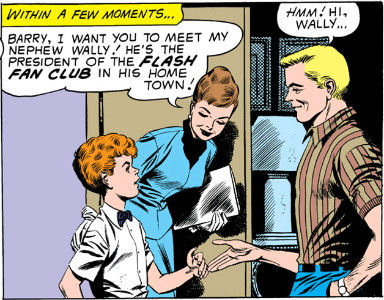 The cover features the Weather Wizard in his first appearance, while a backup story introduces Kid Flash. Iris West’s nephew Wally — a huge fan of the Flash — comes to visit her in Central City, and she arranges a surprise: Her friend Barry Allen knows the Flash, and he just might be able to introduce him!

It’s a DC comic from the early 1960s, so Wally is basically the 1950s media ideal of a ten-year-old: Well-mannered and wide-eyed, saying “Gosh!” and “Jumping Jets!” and otherwise waiting for his elders to speak. 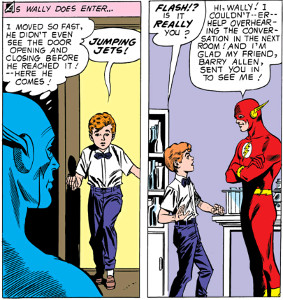 Interestingly, Wally is wearing a bow tie when they meet, but Barry is not.

Barry talks up how the Flash sometimes stops by to use his home lab, and makes a quick-change to surprise the boy, and as he talks about his origin (in surprising detail, minus of course his identity), the accident repeats itself. Wally immediately gains super-speed, and immediately starts speeding around in costume. 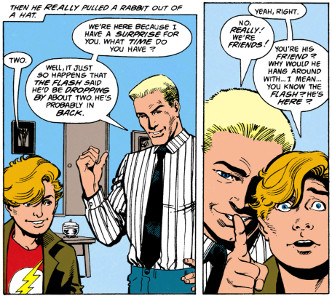 “Born to Run” is actually the second post-Crisis retelling of their meeting, but the first (Secret Origins Annual #2) didn’t add or change anything.

This time around we get the meeting from Wally’s point of view, set in the 1980s. Wally is visiting his aunt Iris for the whole summer, a welcome escape from the parents who don’t understand him. He sees his idol, the Flash, stop an armed robbery (and actually helps a little), on the way to meet Iris’ fiancé Barry Allen. At first, Wally is thrilled to meet a police officer…only to have his hopes of excitement and danger dashed as Barry turns out to be just a grown-up nerd.

Now it’s Barry who decides to introduce him to the Flash, and this time Wally is skeptical — until the Flash really does show up, and the scene continues much as before. It takes a bit longer for Wally’s speed to kick in, but once it does, he’s off and running.

Since Wally was the star of the current book at the time, and storytelling had moved toward strong characterization and multi-part stories, “Born to Run” brought a much more interesting presence to both characters. Getting past 1950s archetypes helps as well, and we see the beginnings of the more irreverent, slightly hotheaded Wally who eventually inspired the animated Justice League characterization.

Also worth noting: Wally’s home life has changed drastically. In the 1960s, he grew up in a picture-perfect family. In the late 1980s, that was revealed as a sham. In 1992, the sham was retconned away and his family had always been dysfunctional, with Iris being the only one he could really relate to. 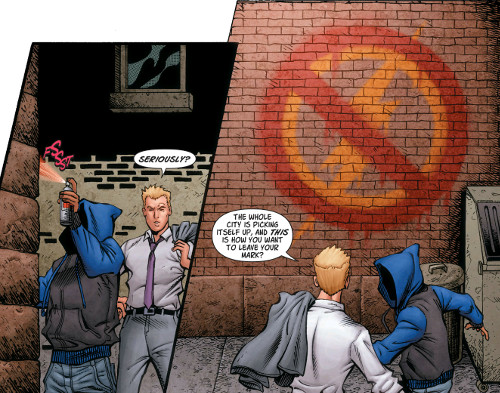 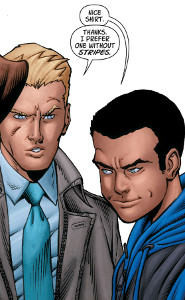 This Wally isn’t a fan of the Flash. In fact, when Barry first runs into him, he’s spray-painting anti-Flash graffiti, because he blames the Flash for not saving his mother when Grodd took over the city for an extended period of time during Forever Evil. Barry is not impressed, and brings him in to the station, where he’s picked up by his aunt Iris, whom he barely knows, but is his only remaining relative. Iris, unable to relate to Wally, convinces Barry to help him out as sort of a big brother.

As far as speed goes, Wally doesn’t pick it up until five years in the future. He’s present when Barry dies in battle, and the power transfers to Wally, who vows to use it as a hero…and to avenge his friend’s death.

It’s a drastic change: We get a Wally who starts out despising the Flash instead of idolizing him, who doesn’t get along with Iris at all, and whose family is not just dysfunctional but full-on broken before he’s orphaned. And of course he’s not a speedster in the present day, only the future.

In this version, Wally West is Iris’ long-lost brother, not her nephew, and a lot closer to her in age. What brings him to Central City, what he thinks of the Flash, and how he gets along with Barry remain to be seen.

I’ve been meaning to do something with that pun for a long time.

Gorgeous photos, especially the one shown above.  I love the design of that fountain.

Dried-up marsh. In May this was a pond. In August it was grassland. Now it’s just the trees, waiting for winter rains to flood the landscape again. (at Madrona Marsh Preserve and Nature Center)

It’s been really interesting seeing the changes to the environment over the course of the year.  Seems like a fascinating place!

Thanks! I wish I’d discovered the place earlier.

Beautiful shot!  And I’d love to see scenery like this, I miss the ocean.

Irving 9th-grader arrested after taking homemade clock to school: ‘So you tried to make a bomb?’

Hills rolling down to the sea.

Thanks. I need to get out there (and other scenic spots) more often. Even though it’s not that far (one of the great things about the LA area is how close it is to sea, mountains, deserts, forests and so on), it’s so easy to get caught up in the day to day grind that you forget to step out and visit what’s right there, on the other side of the traffic and smog.

I’m not sure this fence is entirely stable.

Nah, I’d totally lean on that over the cliff.

I’m not great with heights at the best of times, and it was seriously windy up there that day. On the plus side, I was more worried about dropping my phone over the edge than falling myself, so that’s something.

Gaming is about having fun and it gets better with the more people you share it with. Phenomenal advise.

With all the heat Anita Sarkeesian gets for her Tropes series, you’d think it was a new topic, but Gene Siskel & Roger Ebert had a discussion on a similar theme when they were talking about the influx of slasher movies on their show in 1980.

34 years later and this is STILL relevant

I used to watch Siskel and Ebert all the time. They had a lot to do with teaching me to appreciate movies – as well as shaping my stance on ethical issues like this.

It saddens me all this time has passed and not much has changed. But I am also thankful they got through to me at such a young age. To me, it’s proof that talking about important issues is worth it. Some of us will eventually get it.

Click here for more of Jon Stewart’s coverage of the recent House Committee on Science, Space and Technology hearing. 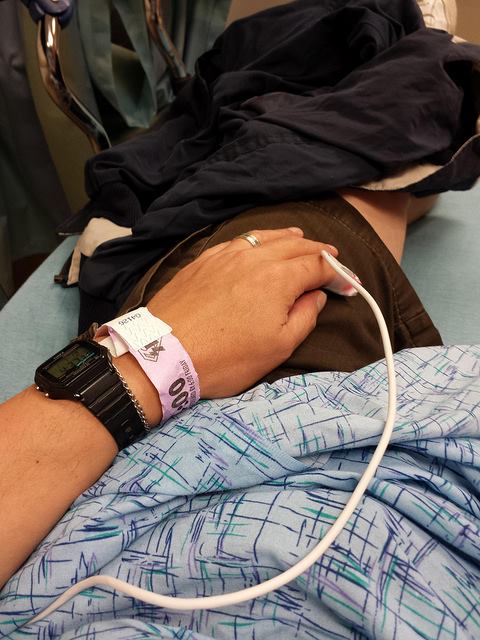 Throwback Thursday: Stuck in the ER during last year’s Comic Con after two sips of a coffee drink with undisclosed peanuts put me into anaphylactic shock. Full story:

Going to the ER at Comic-Con: Not the Peanuts I was Expecting

On that note, I’m doing the FARE Walk for Food Allergy in September to raise funds for research, education & advocacy. You can donate here: [broken link]

Marisa SaamYou’re only allowed to drink black coffee this year. 😉

Adrian SosaDonation link is not working for me

But I can get there from here: 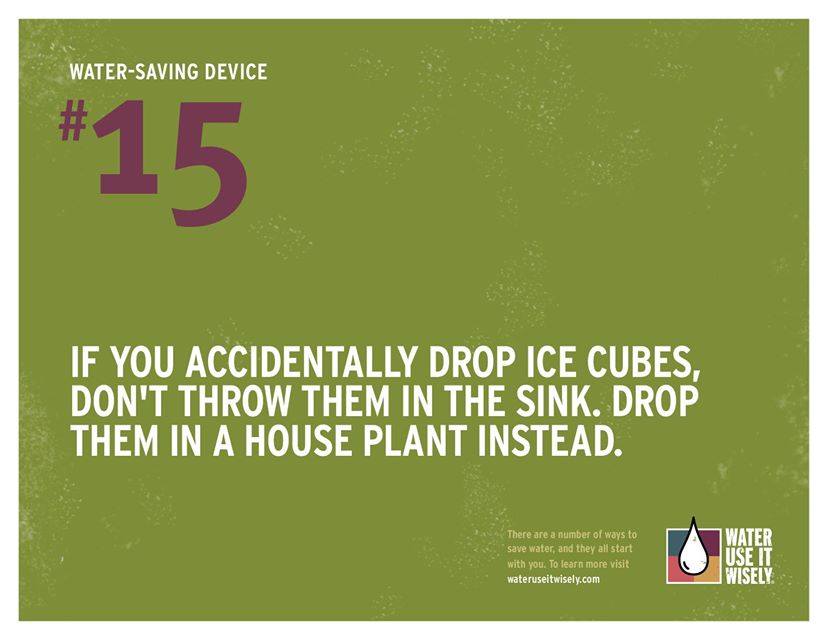 I actually do this with leftover ice at fast food places too. Not house plants of course, but instead of putting the whole paper cup with ice in the trash (where the ice will melt and fill up the bottom of the bag), I'll take it outside and dump it into a planter or onto the lawn where it'll do some good.

Obviously not getting fast food would be even better, but a little offsetting is better than none. Yesterday Katie and I were discussing ways that restaurants could cut down on waste, from tightening dishwashing practices to using the dishwater as greywater for plants or toilets to collecting liquids for…well, we weren't too sure what you could do with random liquids, but maybe find a way to dispose of them that replenishes groundwater instead of making the trash bins all nasty. All subject to sanitation / food safety needs of course.

Lee VibberAt home I just pick them up and rinse them off and put them in my drink…. Good idea about fast food ice, though.

Lee VibberJust thinking about what I said….rinsing them off probably wastes more water than was in the cube, doesn't it? D'oh!

Kelson VibberHeh…yeah, it probably does.

Lee Vibber(Truthfully, I'm a 5-second-rule person when it comes to ice on the floor, I usually just pick them up and put them in the glass, but I didn't want to actually admit that….)

Katie ForemanYou could rub it around in a (clean) napkin or something for a bit–use body heat to melt off the immediate outside and wipe off any crud. Unless it skids under the overhang of the cabinets. Then that sucker's plant nutrition.

Talbot BradyAwwww. All this cleanliness. You gotta give your immune system to chew on from time to time.

Katie ForemanThat's all well and good, but I prefer to do that without also chewing on hair and mummified carrot peels.

I felt so angry at the UCSB massacre (an article about this incident and a script of his video’s speech) and the sexism we’re blind to everyday so I drew about my opinions on sexism to channel my rage.