I couldn’t quite get the color processing on this hidden bench the way I wanted, but I think it’s interesting at least. 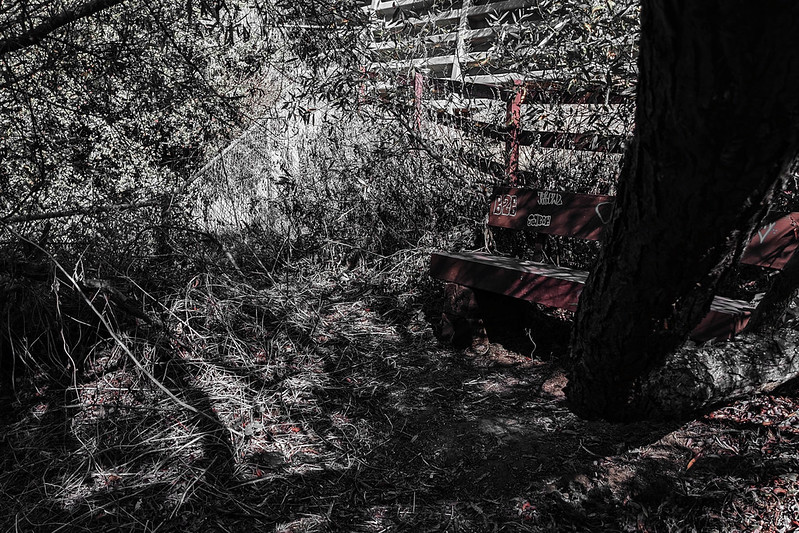 I went on a hike today, up in the coastal hills near Los Angeles. I took a trail along a (dry) streambed up through a canyon, which is variously known as George F. Canyon or Georgeff Canyon. No one knows who George (or Georgeff) was – they just found it on an old map when they dedicated the nature preserve.

There was SO. MUCH. POISON OAK. You really do not want to stray much from the path here!

Since pandemic restrictions lifted last year, the mall has added a few restaurants and shops in and around the courtyard, more chairs and tables, a toy kiosk, and WiFi. People are hanging out here now. I’d certainly rather set up outside than at one of the seating areas inside the mall. I’ve spent a couple of mornings and afternoons here with my work laptop for a change of scenery without going all the way to the office.

The biting flies are a pain, though. Literally.

One of MANY house finches I heard before turning a corner and seeing them. 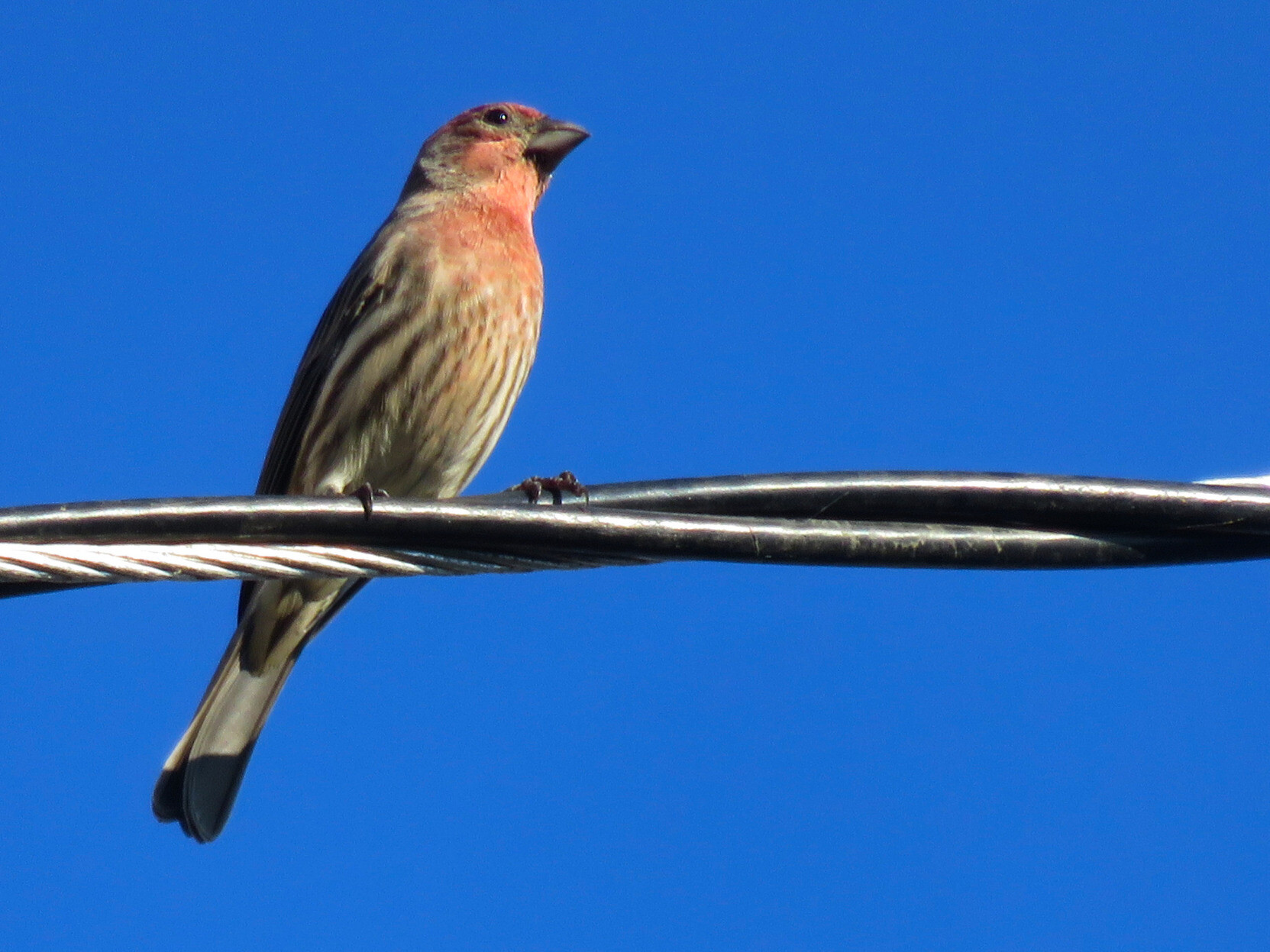 A painted lady (or related) #butterfly seen while out walking today.

A lesser goldfinch having a snack. 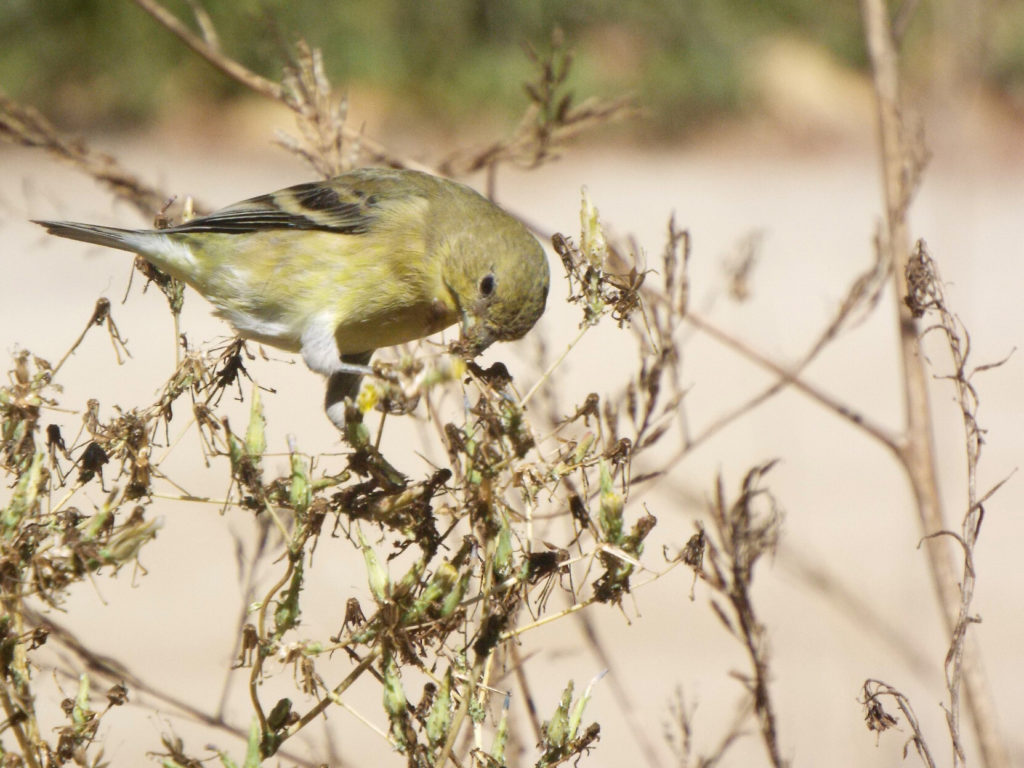 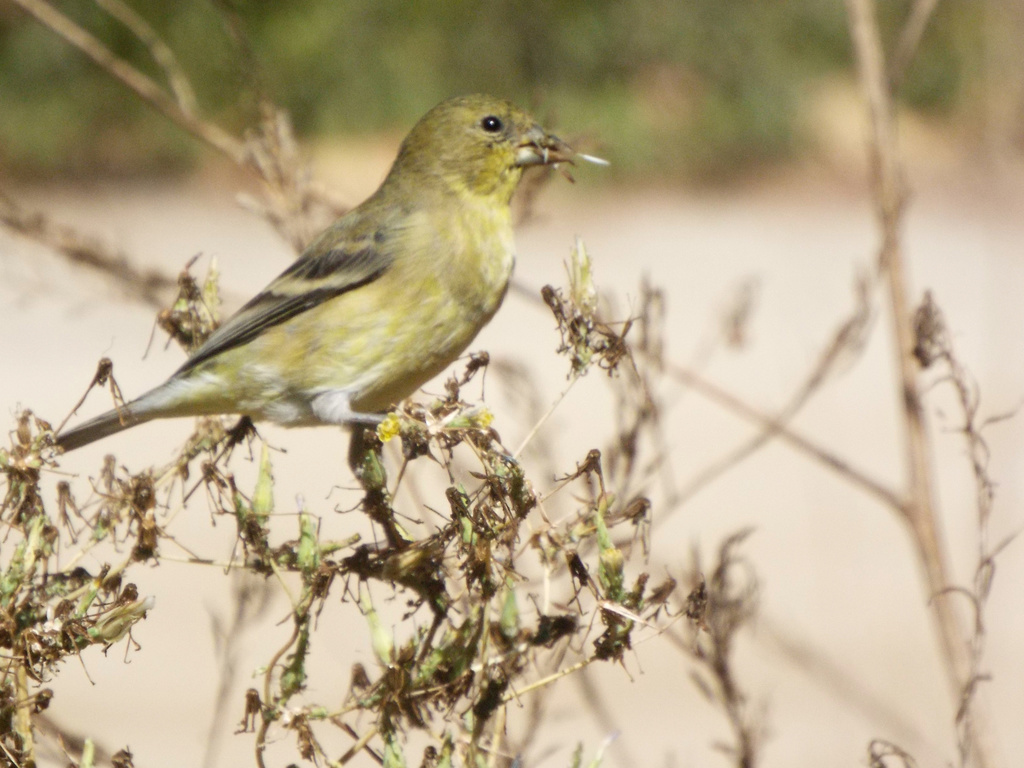 Some #butterflies spotted the other day while hiking. A gulf fritillary (orange), some kind of blue, possibly a marine blue (tiny with brown wings and a blue body), and possibly a cloudless sulphur (yellow).

The blues are always hard to spot because they’re so small, and the sulphurs just don’t want to pause most of the time. But the fritillaries are more willing to stop, and there were SO MANY of them at the gardens on Monday. 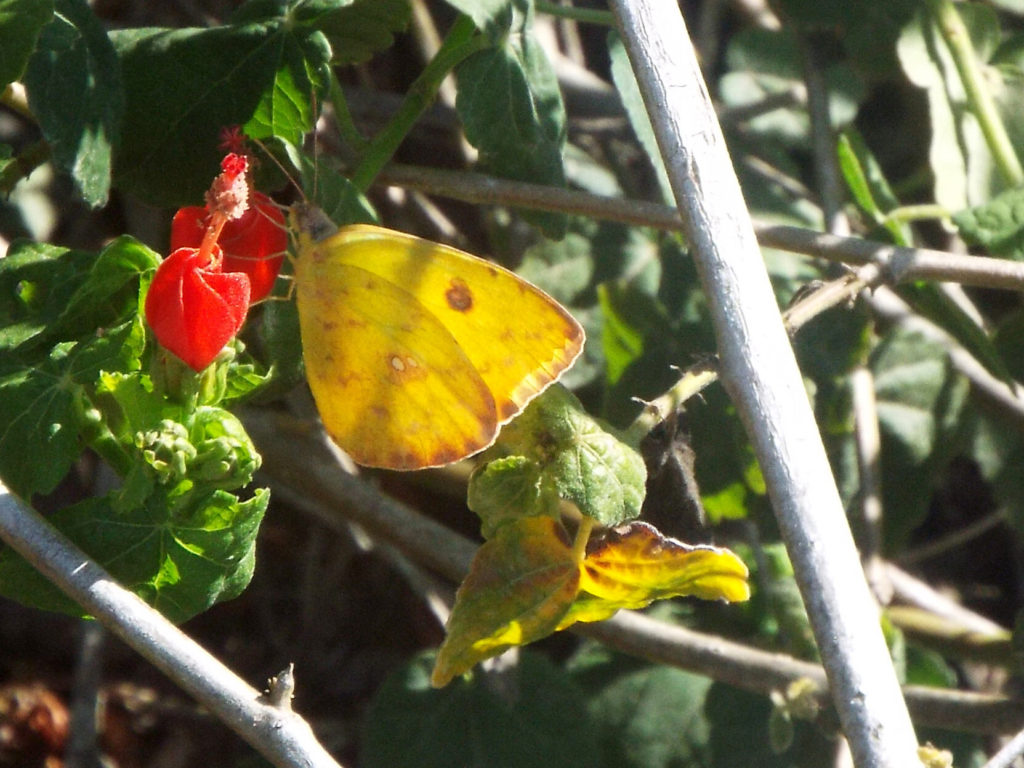 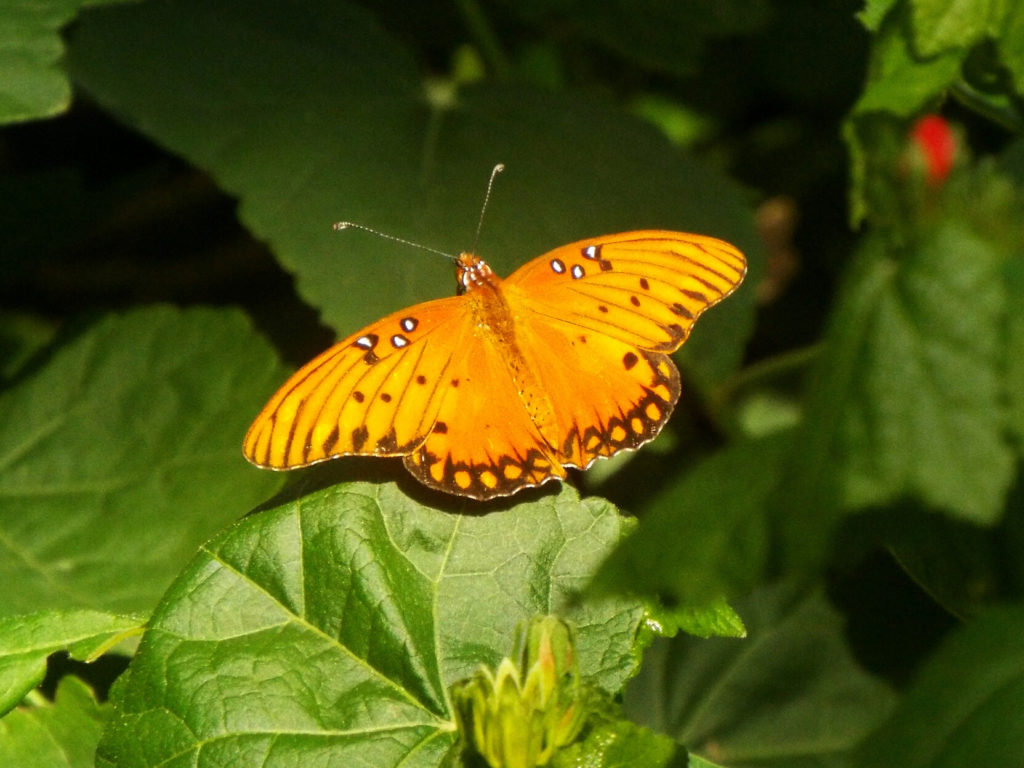 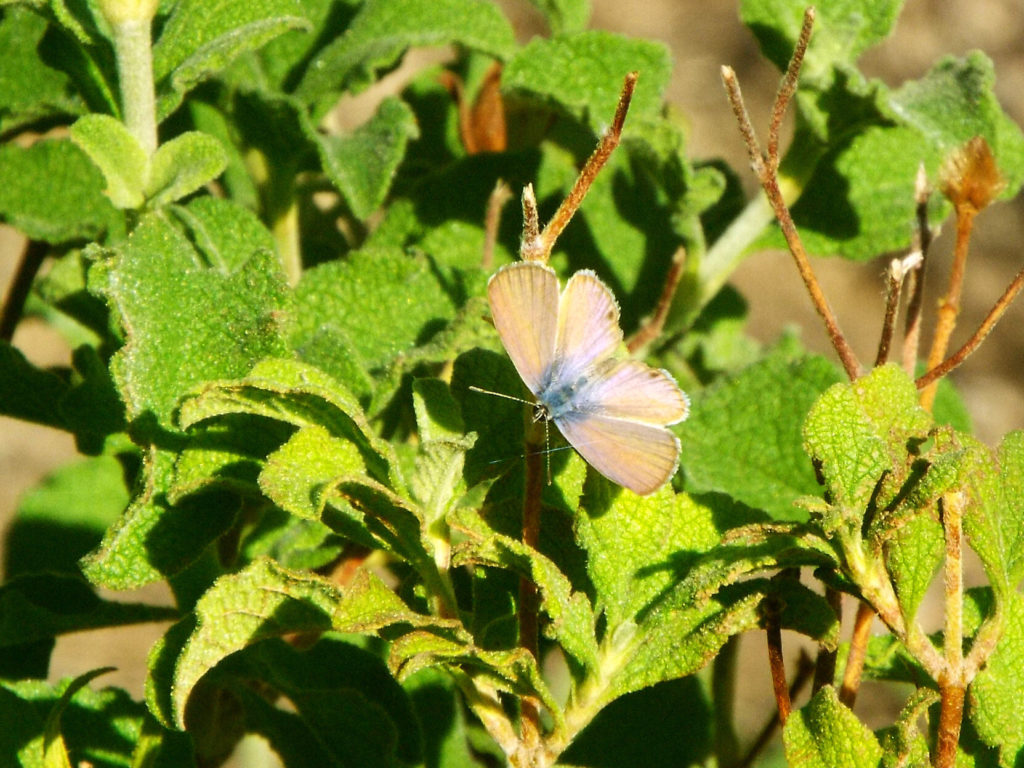 Maybe a cloudless sulphur? Whatever it is, these yellow ones hardly ever pause long enough for me to take a picture.

There were so. many. fritillaries.

Twisted tree and canopy. The tipu trees near the old office never sprawled like this. Or didn’t have the chance to, more likely. 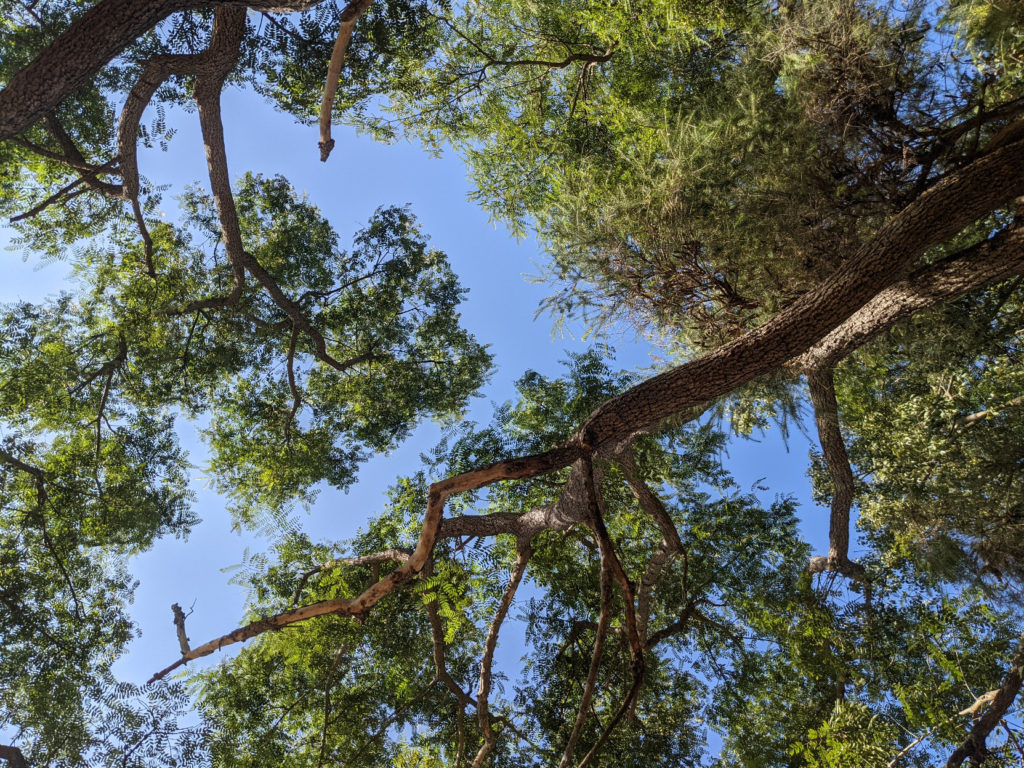 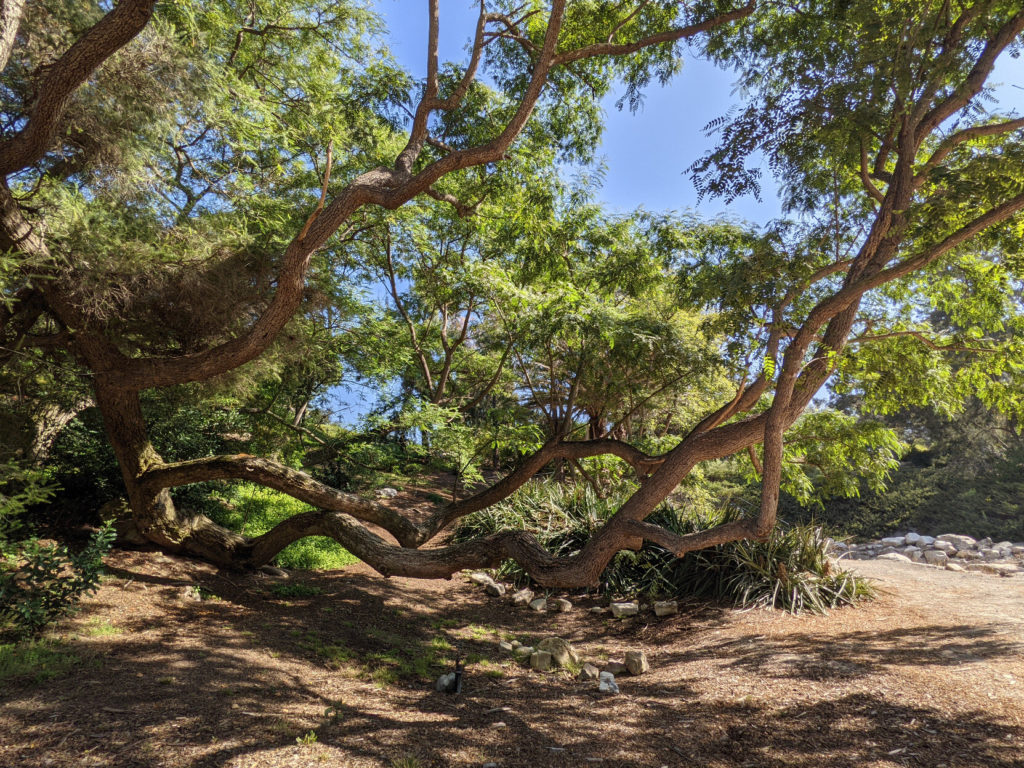 I went to the same park again today. I spotted a Fox Squirrel eating a pine cone in a tree elsewhere in the park, and a California Ground Squirrel standing guard outside the enclosure’s chain link fence.

Seriously, it. did. not. move. for several minutes while another ground squirrel ran inside the fence and waited, and I moved to a better angle for photos, until it abruptly turned around and ran through or under the fence. 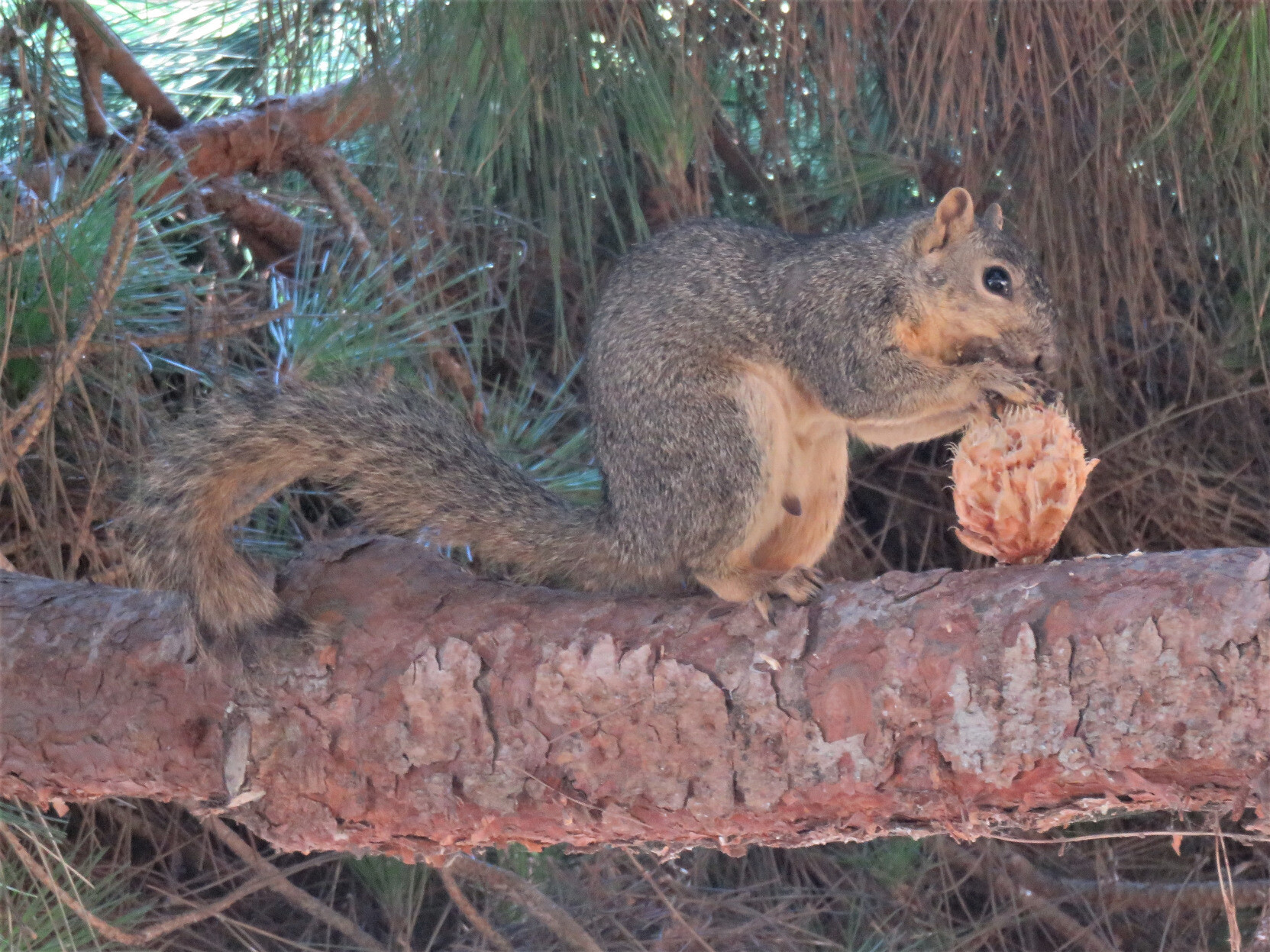 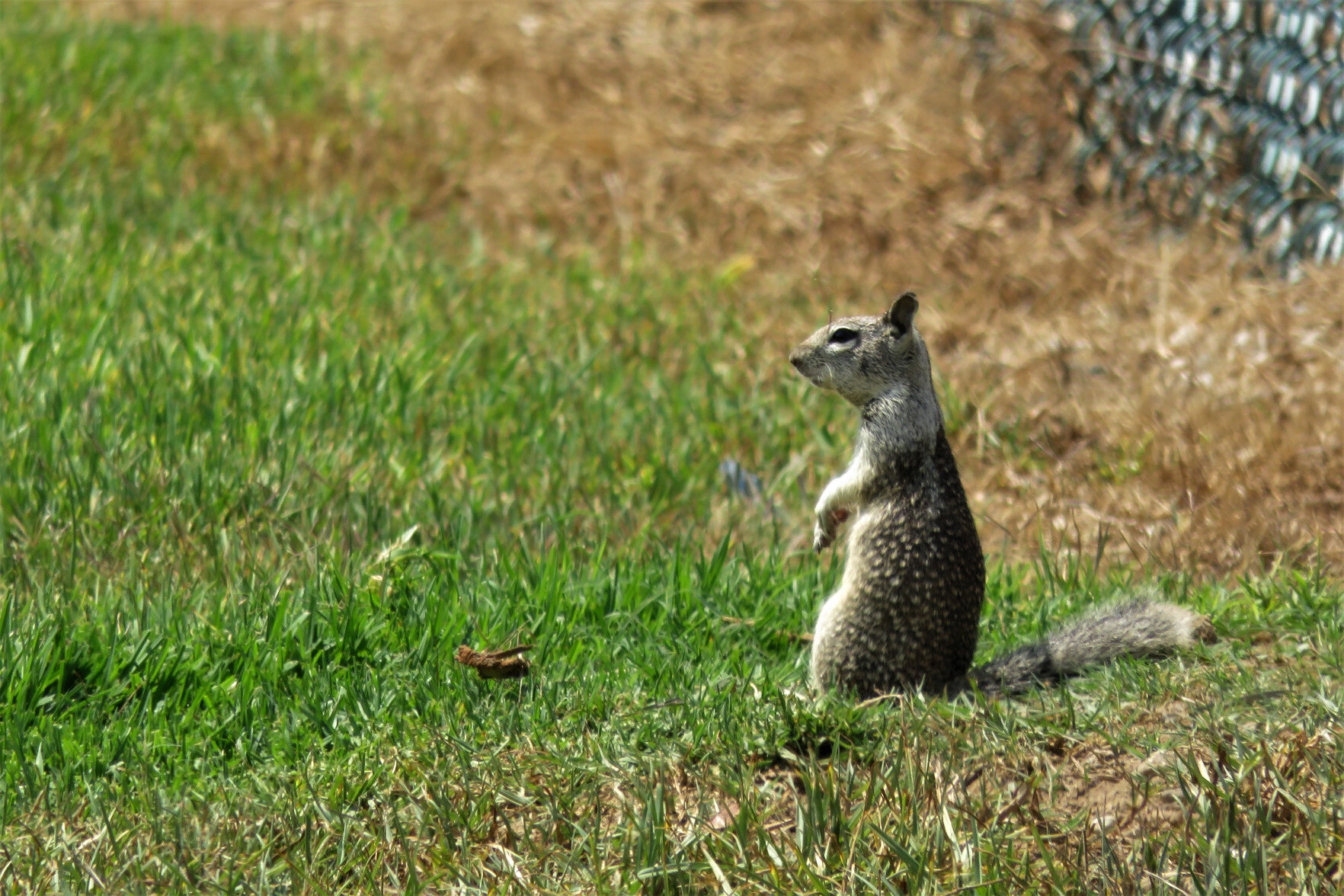 A week later, all the weeds in the enclosure where I saw the hawk have been cleared out and the feral palm trees cut down.

That’s probably why I was able to get a clear view of some of the ground squirrels, looking out from their burrows and climbing around on the tree stumps. 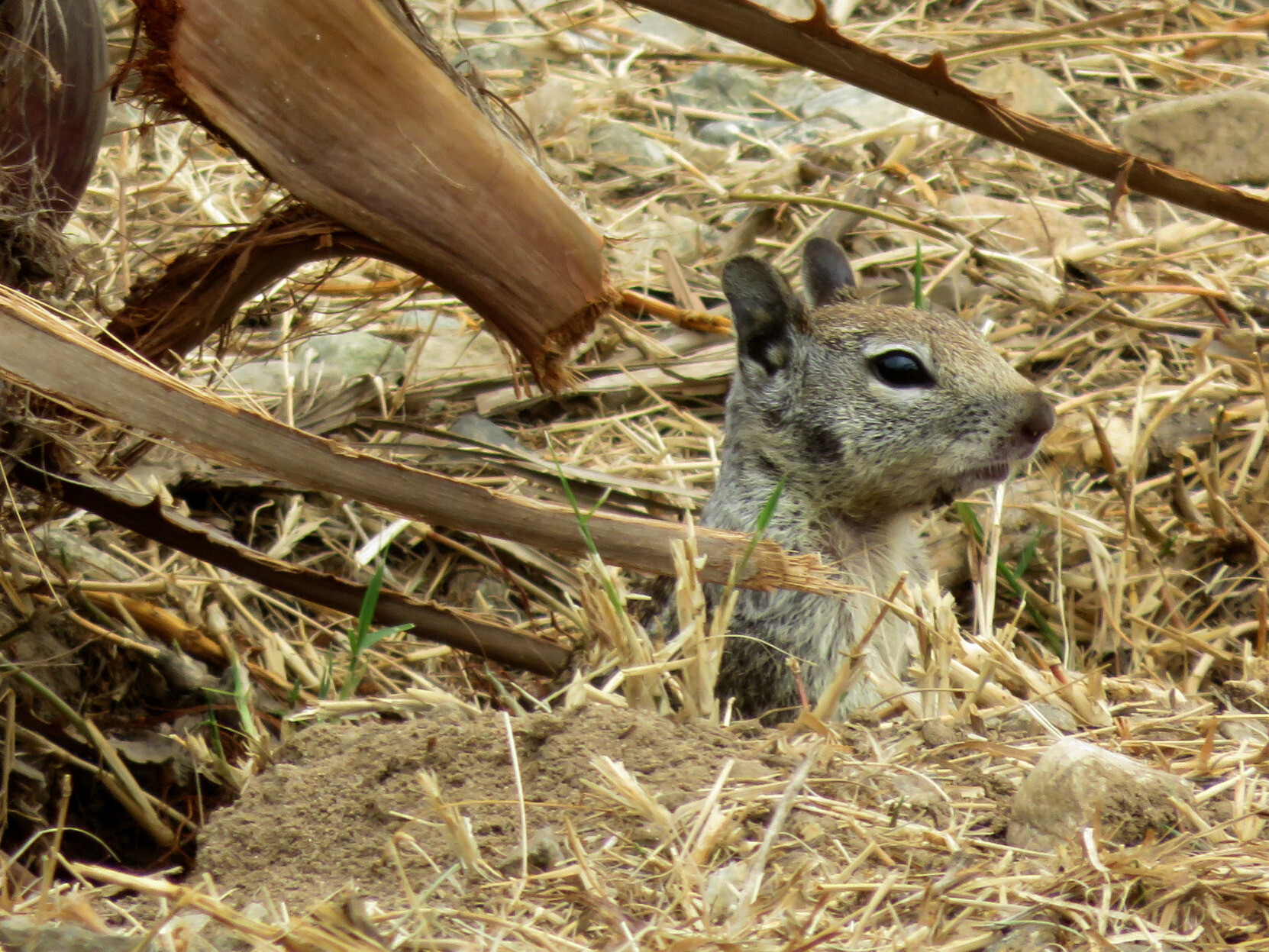 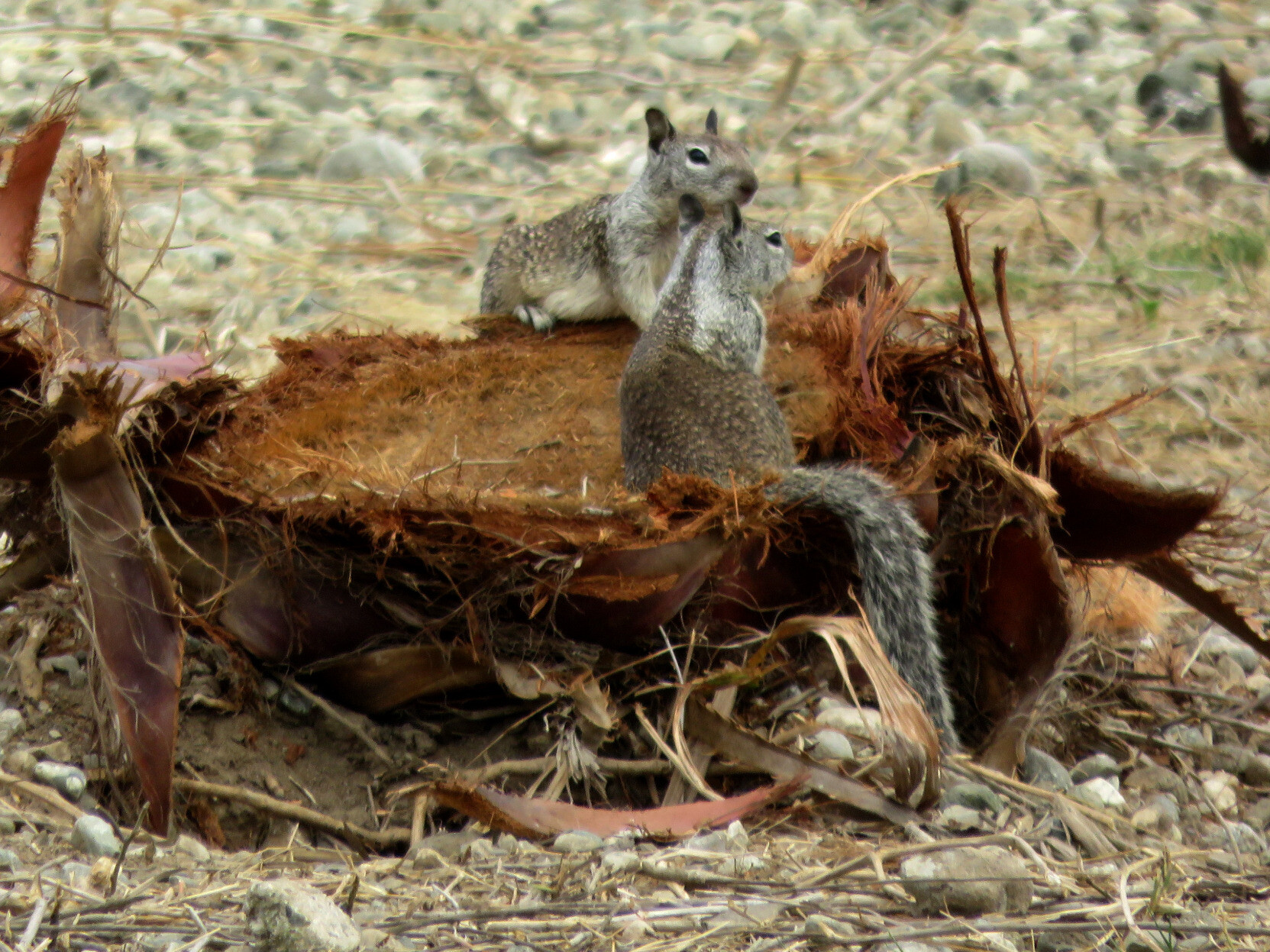 At the same park where I spotted a Cooper’s Hawk and a ground squirrel a week or two ago, in a fenced-off area around a pair of electric transmission towers. Since then, all the weeds and feral palm trees have been cleared out, leaving nearly bare ground, but the squirrels are still there, climbing around on the stumps and burrowing.

I startled a ground squirrel while looking for something that was chirping in a fenced-off area of a park with a pair of transmission towers.

The squirrel hid, but this hawk – which I suspect was looking for the squirrel – flew out and perched on the fence for a few minutes before flying up to one of the lower struts on the nearer tower. 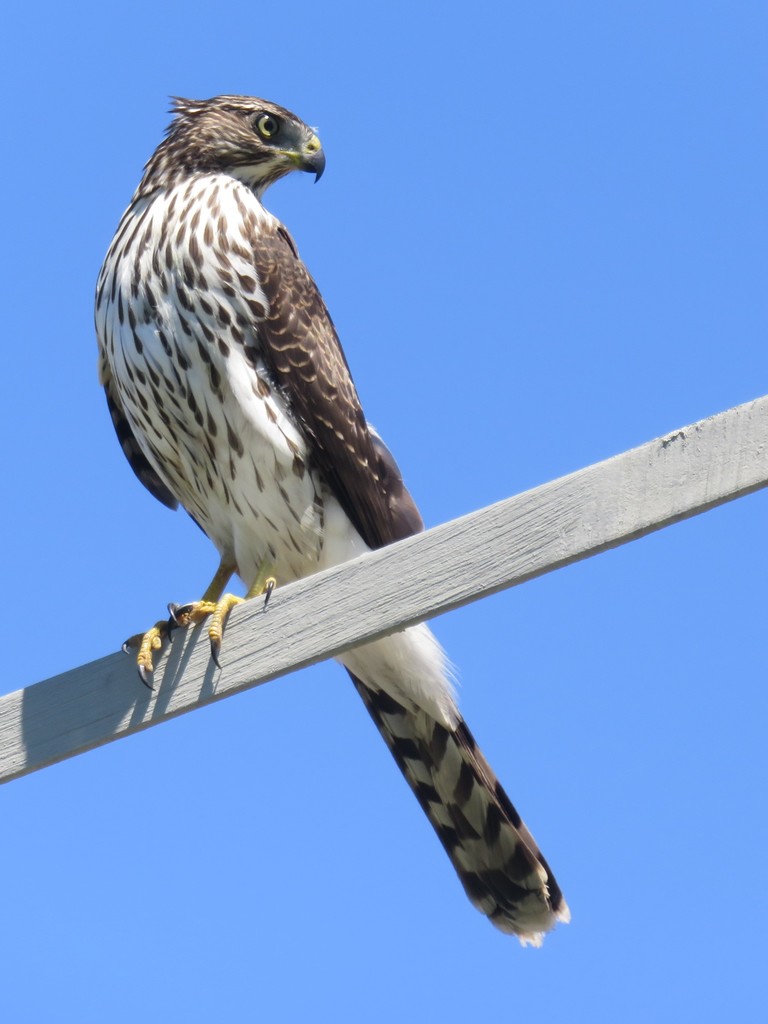 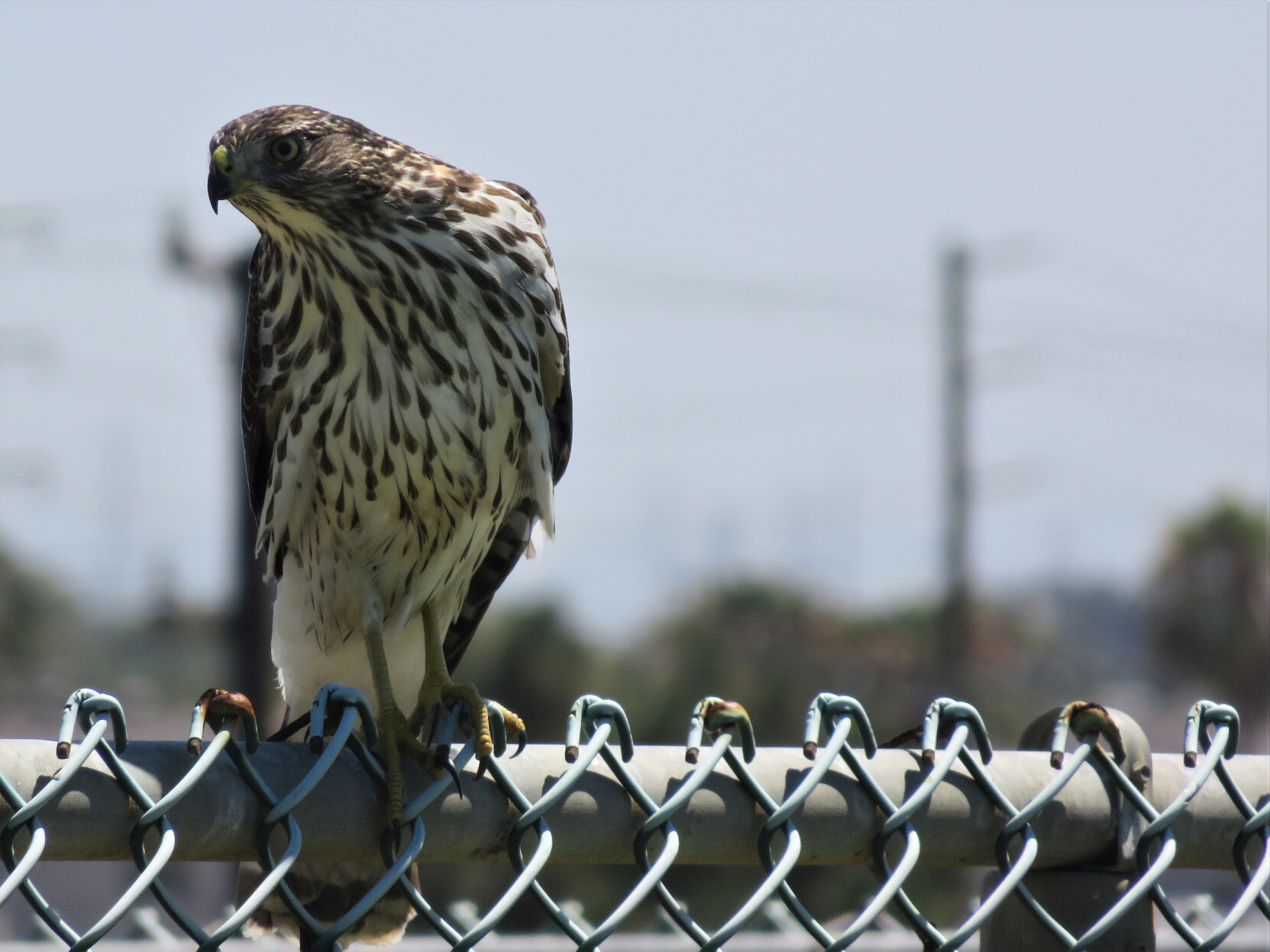 I heard repeated chirping from a fenced-off area of a park with a pair of transmission towers. As I got closer, I couldn’t spot a bird doing the chirping, but I did see a ground squirrel hiding under a small palm tree. I took a photo from a distance, then moved closer, at which point I startled the squirrel, which ran into one of the holes, and also a hawk, which flew from who knows where inside the fenced area to the edge of the fence. I was able to walk around and get some nice clear shots of the hawk, both as it sat on the fence and after it flew up onto one of the lower struts of the nearer tower.

Some #butterflies from an exhibit, including a banded orange, a postman, an two morphos (they had SO many morphos)…

one of which decided to land on my leg and stay there. They had made it clear that we were not to touch the butterflies so as not to damage the wings with skin oils, so when it still hadn’t left after a couple of minutes, I asked a staff member to remove it, and they coaxed it away with a sponge brush soaked in gatorade.

Some #florespondence from a walk around the neighborhood. 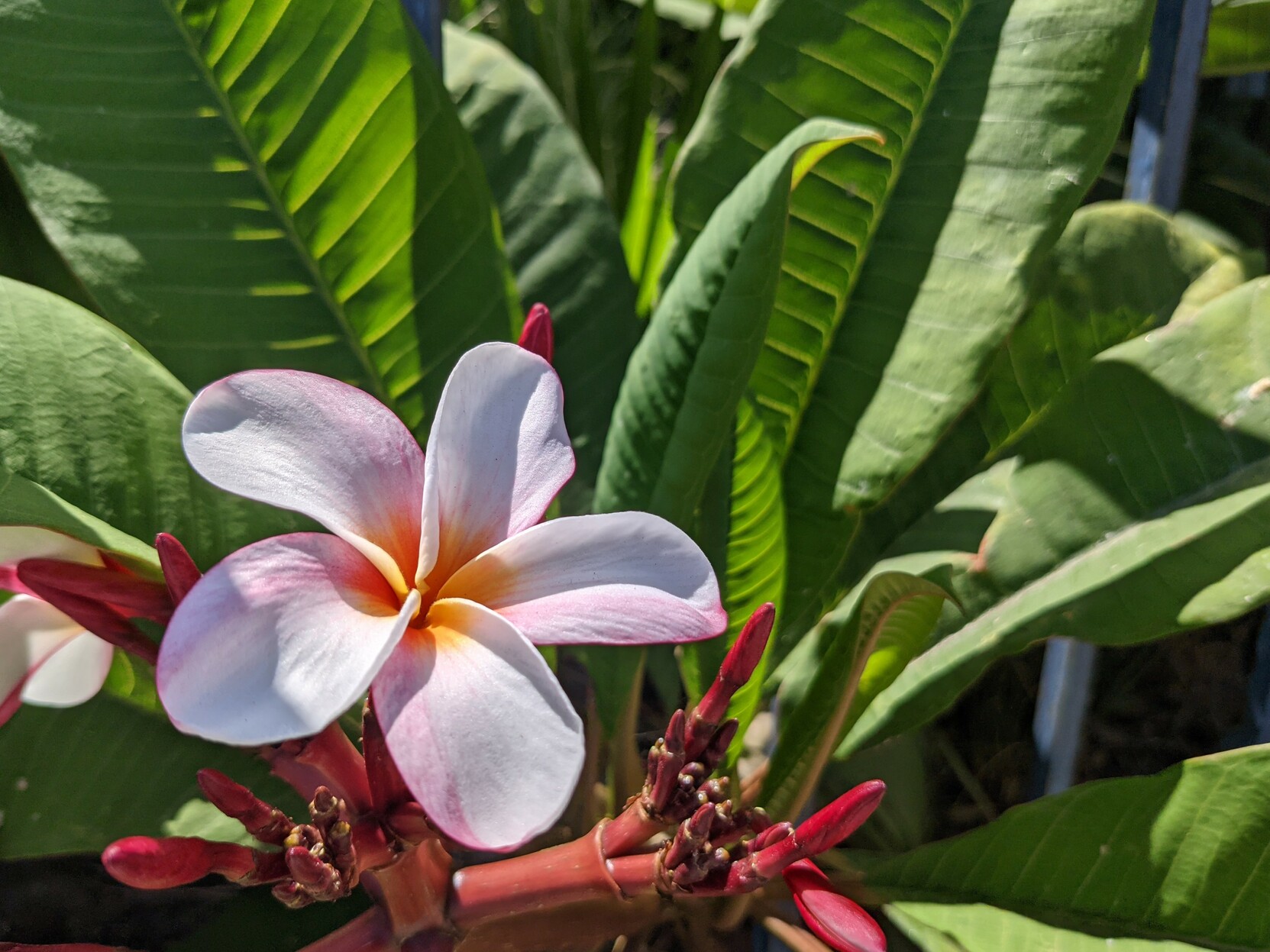 A #MonarchButterfly spotted while walking around the neighborhood the other day. 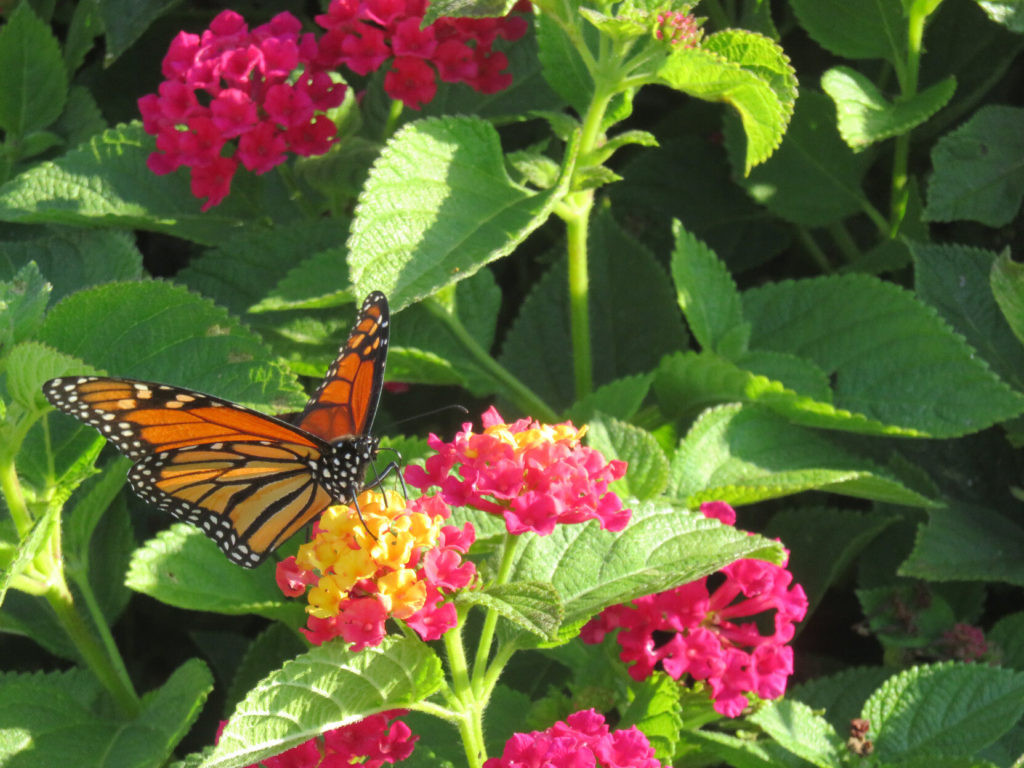 Some #florespondence from last weekend’s walk at the botanic gardens.

I didn’t write down what the yellow flower is, but iNat suggests it’s Senna didymobotrya, a cassia native to Africa.

The magnolia was a popular nectar spot: every single flower that I could see had multiple bees crawling around in it. 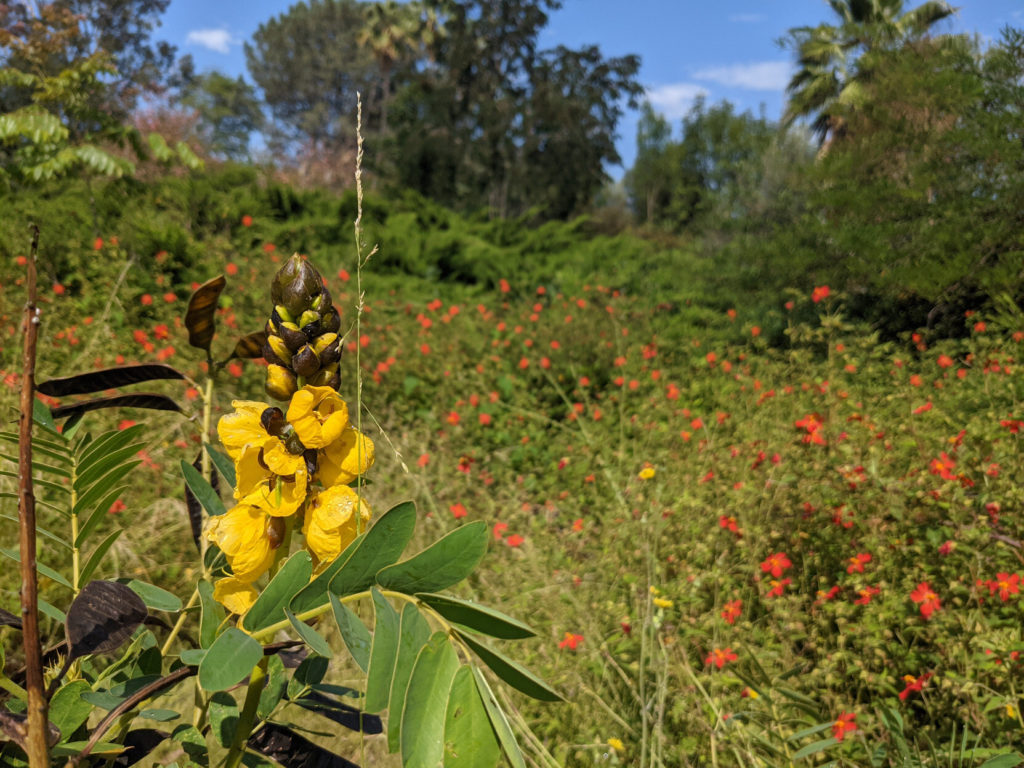 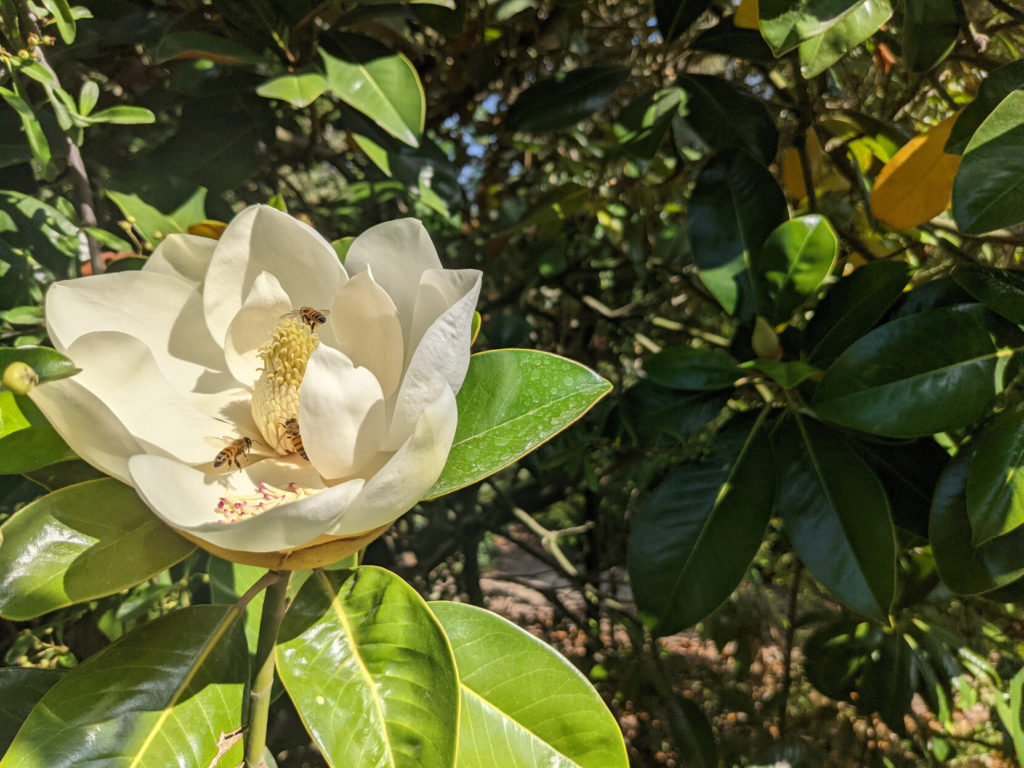 Sculpture at the garden. There are a half dozen pieces scattered around the grounds of this botanical garden. Pictured here are Fuller (as in Buckminster) by Doris Sung and Trace by Nancy Graves.

Fuller is near the entrance, so I see it most times I go walking there, but Trace is waaaaay on the other side. 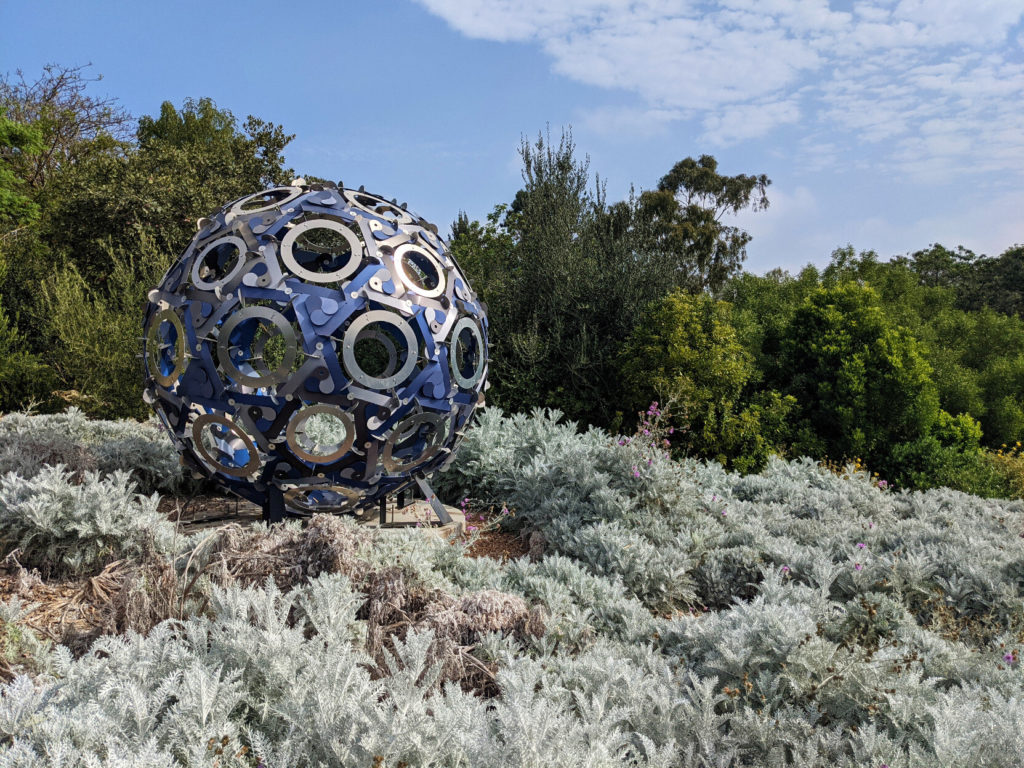 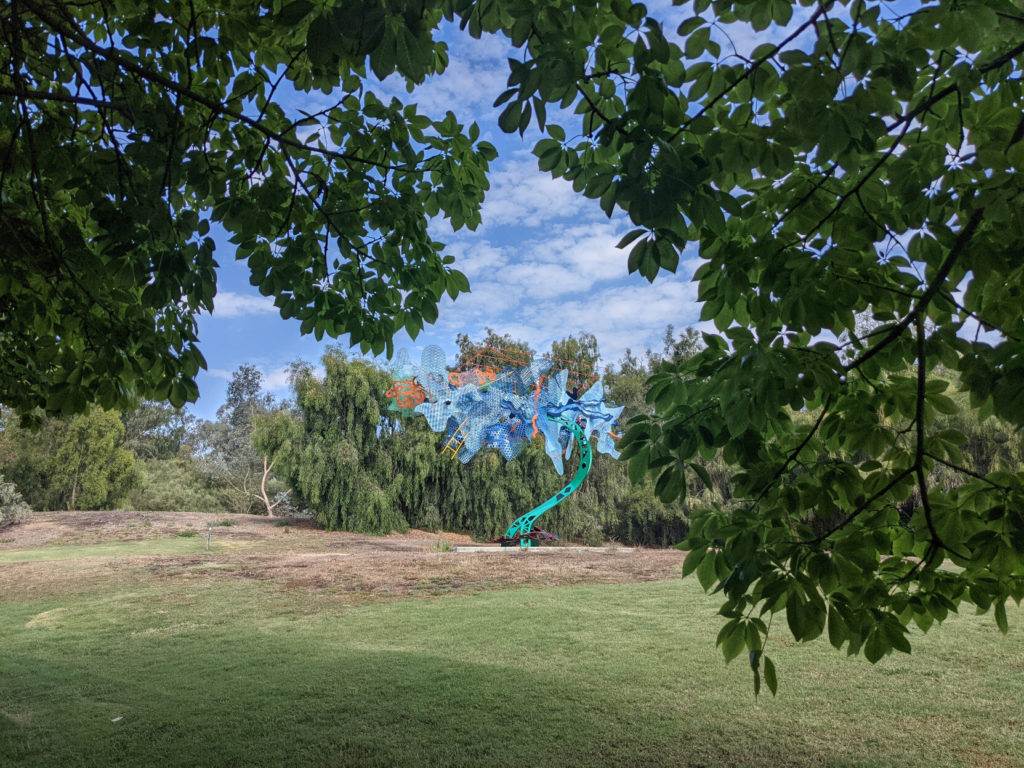 Some birds spotted on a hike yesterday morning: a California Towhee (the mature one perched on top of a bush) and a bushtit (looking very birb-like). A whole lot of the latter were flying back and forth between the trees on either side of the path, barely stopping long enough for me to point the camera in the right direction. 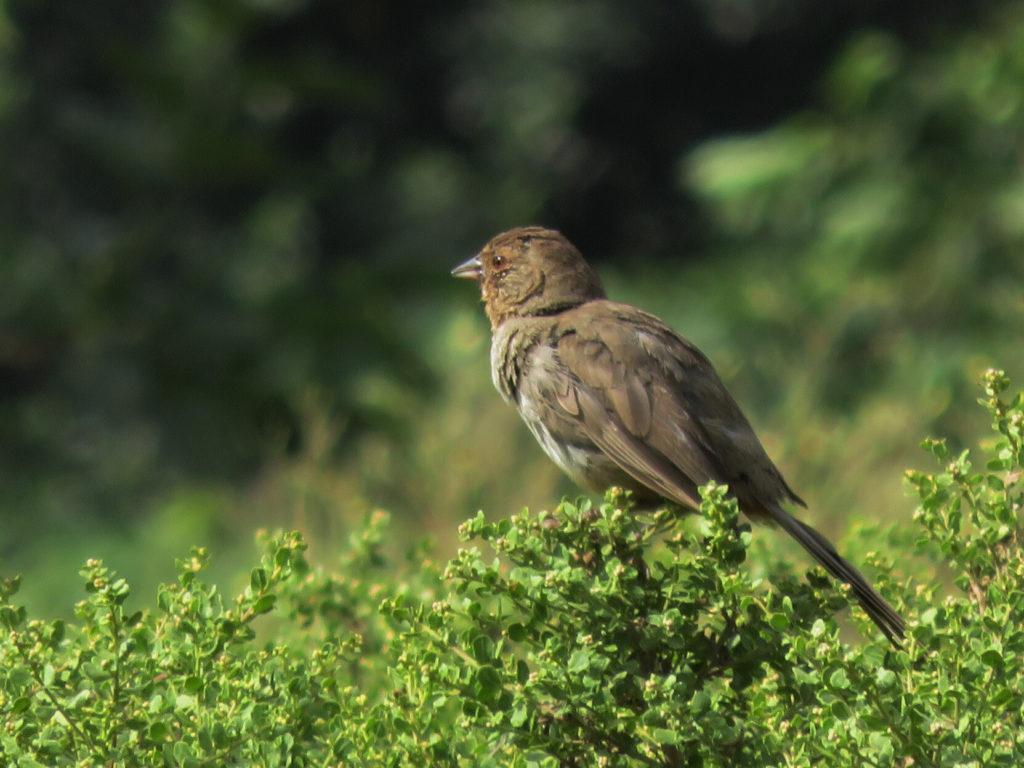 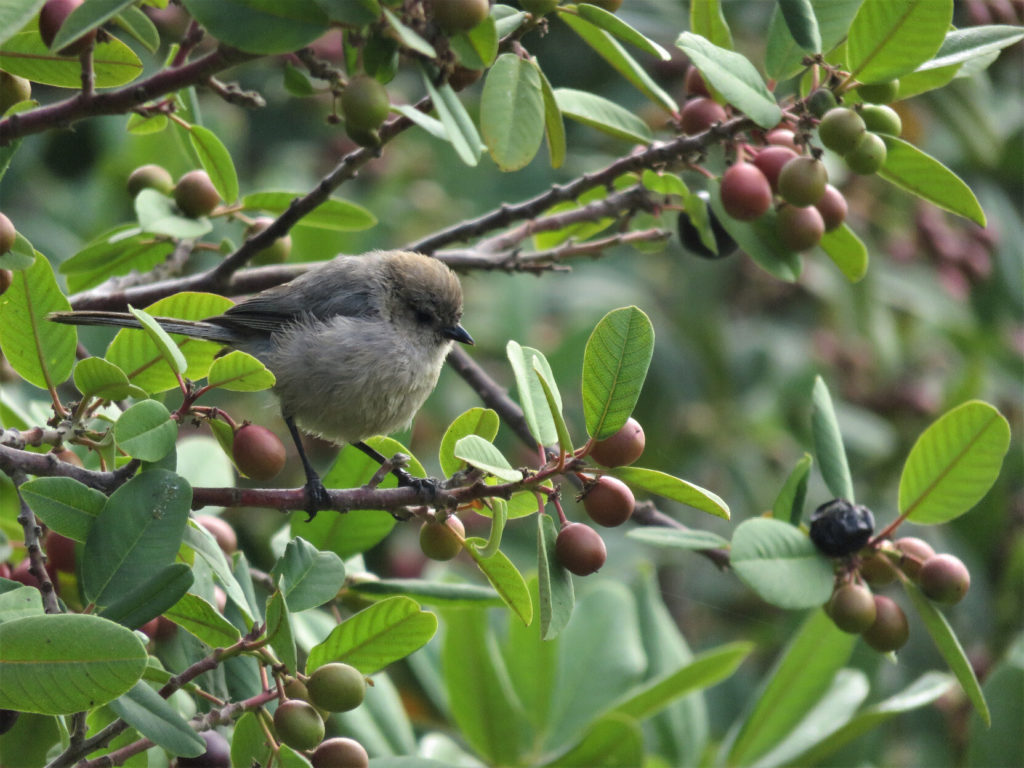 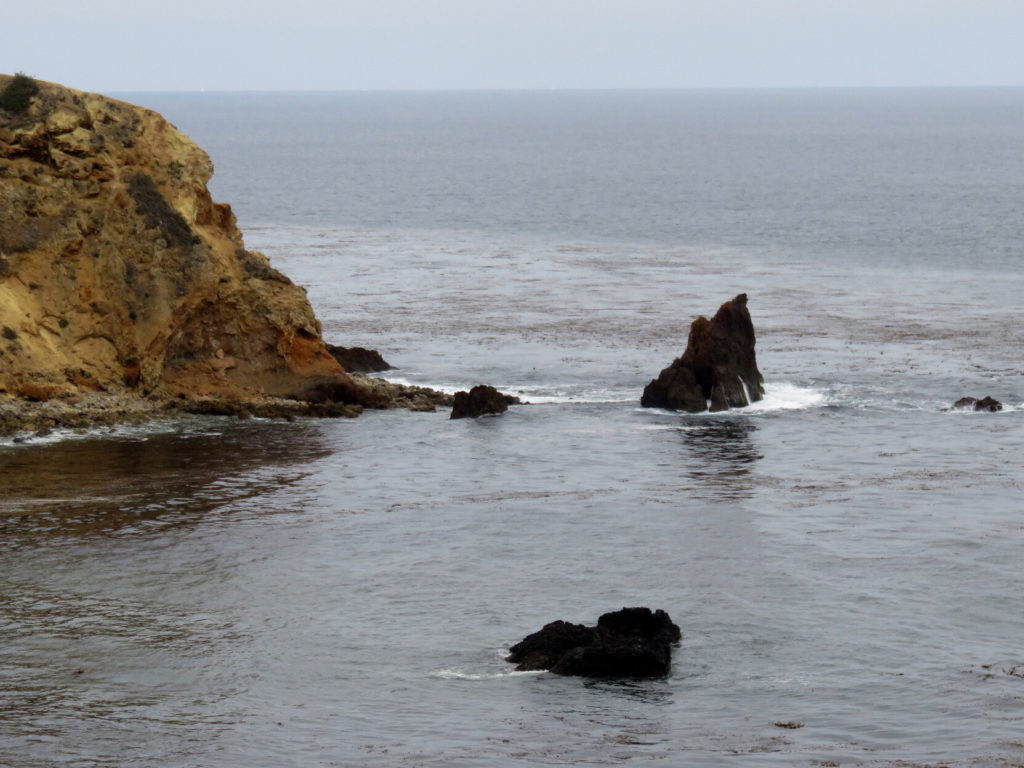 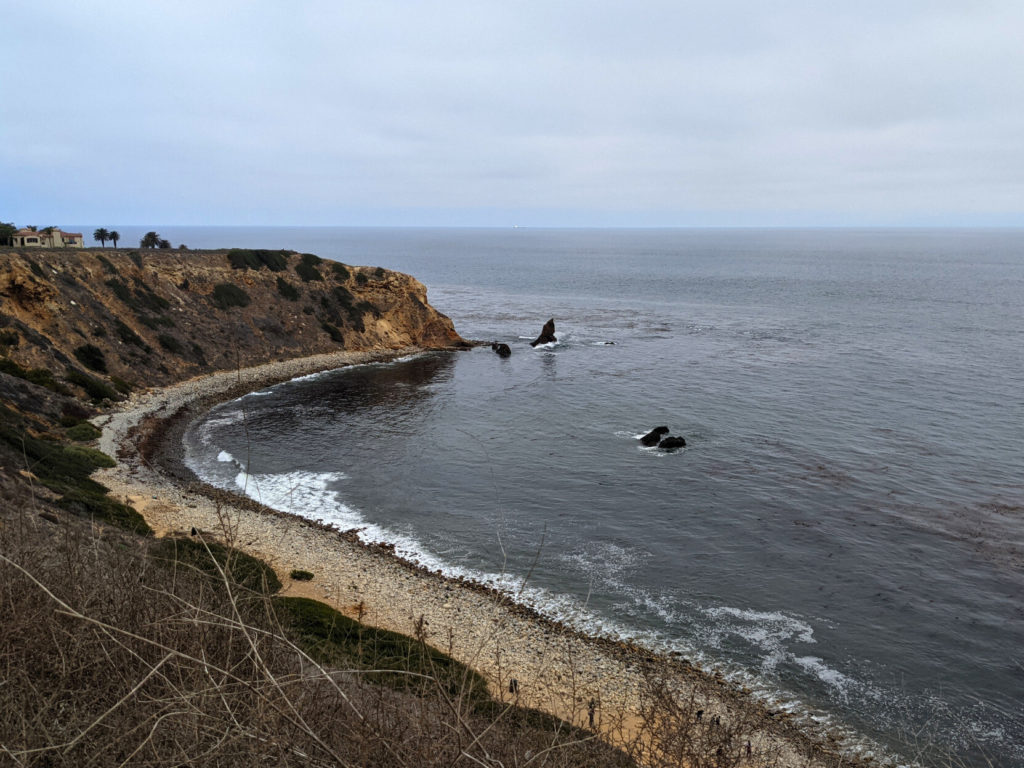 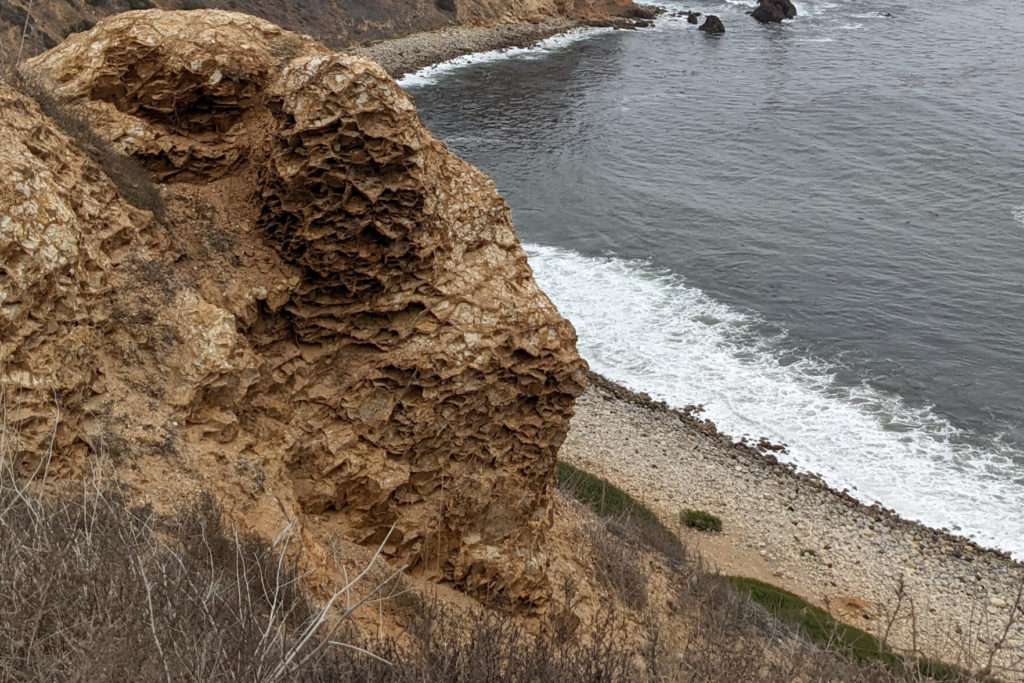 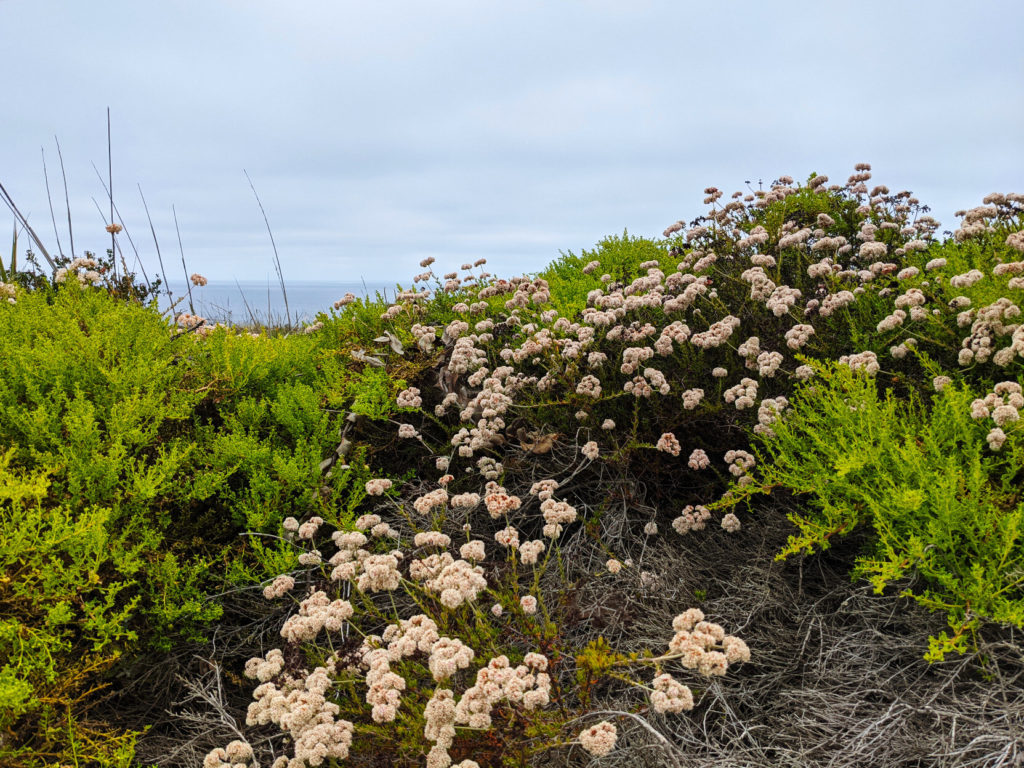 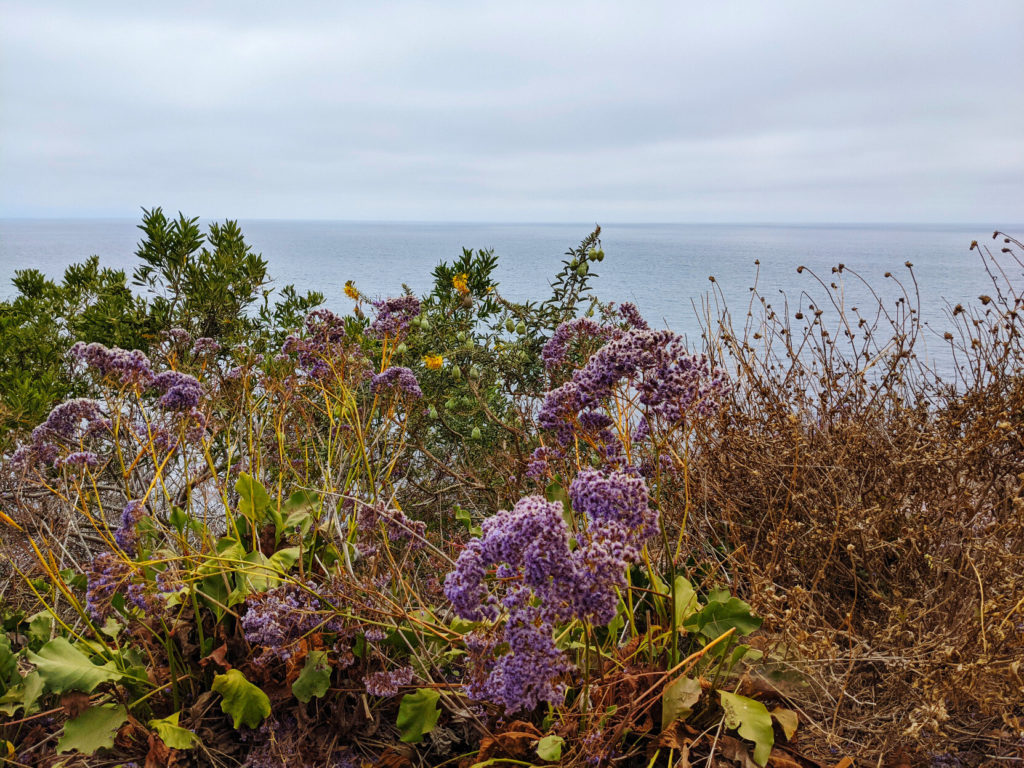 Scenes from a seasonal marsh. Low areas collect water and form ponds during winter and spring, then it dries out over the summer. All the ground in these photos except on the near side of the logs in the last picture usually spends part of the year underwater.

The lowest part of the preseve is also where the most trees are (presumably because water has more time to soak into the ground there).