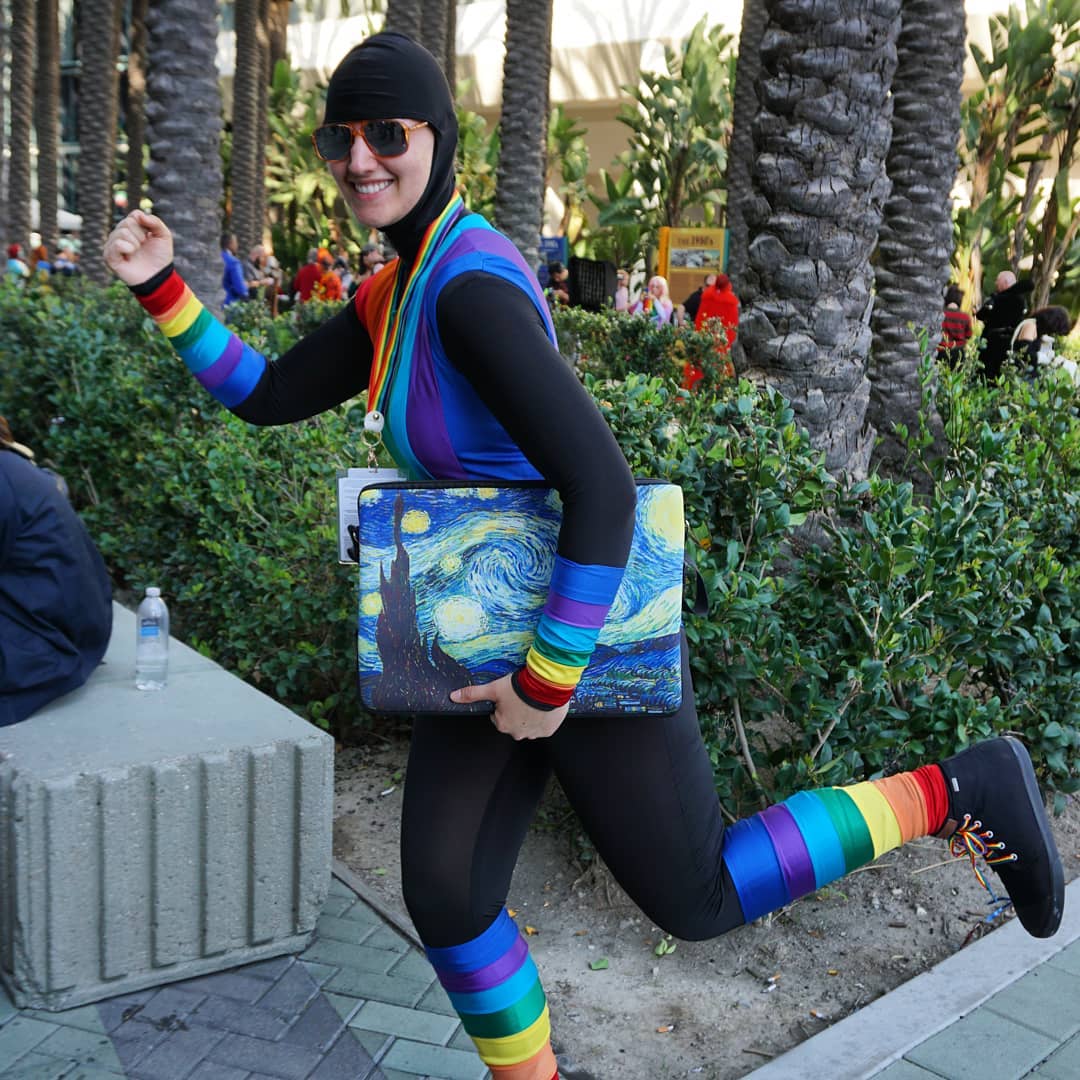 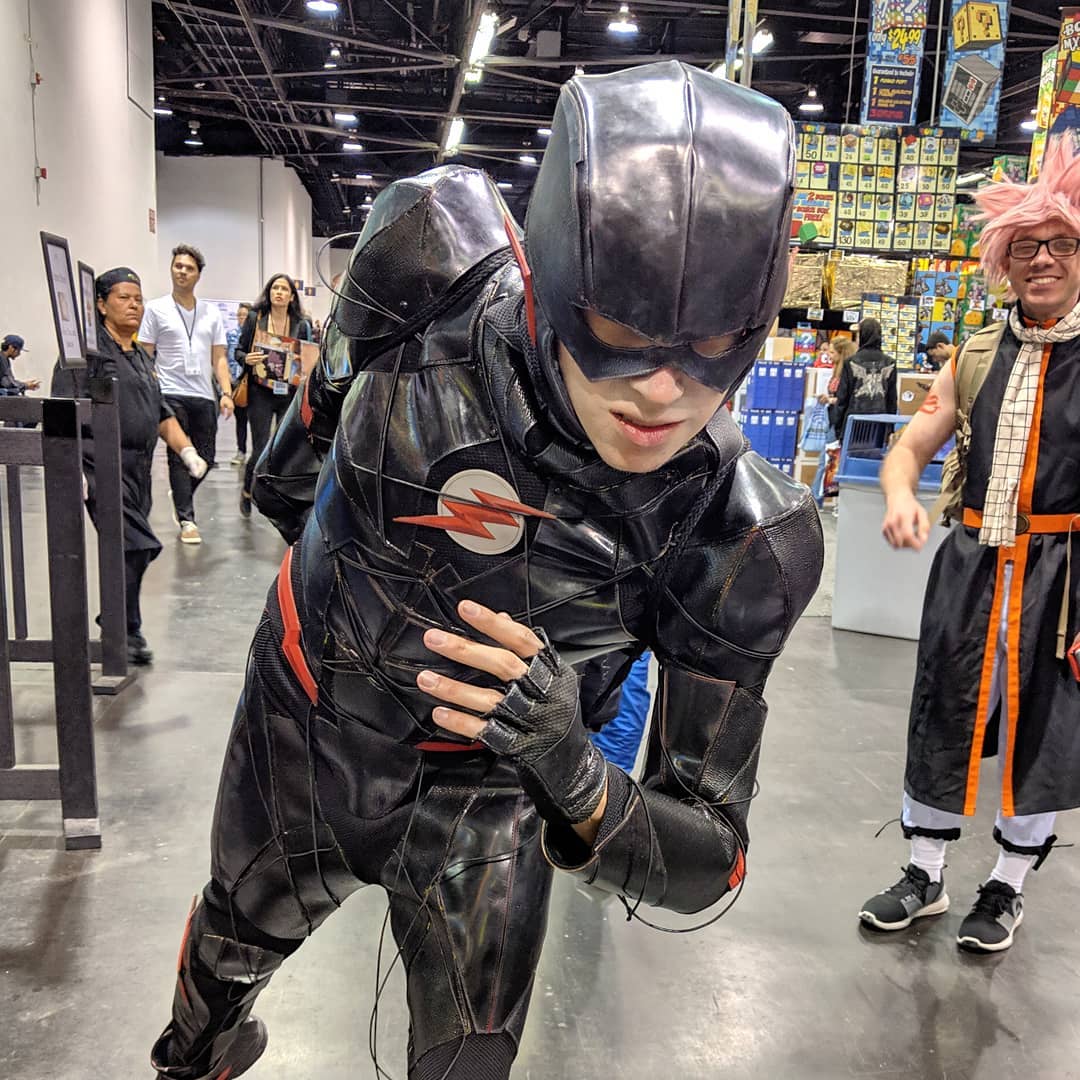 A page of comic strips about Aquaman in the style of Calvin & Hobbes, Peanuts, The Far Side, and DIlbert.

Spoilers for upcoming comics in April!

This is part of DC’s official solicitations for that month, and you can see the full list of them here.

THE FLASH #68
written by JOSHUA WILLIAMSON
art by CHRISTIAN DUCE
cover by DAN MORA
variant cover by MITCH GERADS
The Flash has arrived back in his home of Central City to discover something…off. The people are all acting strangely, including his friends and colleagues—but before Barry can figure out why, the entire Central City PD attacks! At last the great trick is revealed: the Trickster now rules supreme! With Iron Heights as his fun-house base of operations, Trickster plunges the entire city into madness—and the Flash is powerless to save them!
ON SALE 04.10.19
$3.99 US | 32 PAGES
FC | RATED T
This issue will ship with two covers.
Please see the order form for details.

THE FLASH #69
written by JOSHUA WILLIAMSON
art by SCOTT KOLINS
cover by DAN MORA
variant cover by MITCH GERADS
Riot in Central City! Trickster has pulled out all the stops in his assault on Flash’s hometown, and the Scarlet Speedster is powerless to crack Trickster’s code! Our hero is faced with an impossible choice: save the people of Central City—or let the villain who caused it all escape to wreak havoc another day!
ON SALE 04.24.19
$3.99 US | 32 PAGES
FC | RATED T
This issue will ship with two covers.
Please see the order form for details.

THE FLASH BY MARK WAID BOOK SIX TP
written by MARK WAID, BRIAN AUGUSTYN and RON MARZ
art by PAUL RYAN, EDUARDO BARRETO, BART SEARS and others
cover by STEVE LIGHTLE
In these tales, the mayor of Keystone asks the Flash to relocate himself away from Keystone City—but trouble still manages to find the Fastest Man Alive in his new home of Santa Marta. First, the Flash saves a presidential candidate from the Top, a member of the Rogues. Then, Mr. Frost strikes—and his illusions threaten to destroy both the Flash and his new home. And when word spreads that the Flash has moved to a new city, several of his greatest foes show up to cause trouble, including the earthquake-causing Major Disaster! Collects THE FLASH #119-129, THE FLASH/GREEN LANTERN: FASTER FRIENDS #1-2, THE FLASH PLUS NIGHTWING #1 and a story from DC UNIVERSE HOLIDAY BASH #1.
ON SALE 05.29.19 | $29.99 US | 416 PAGES
FC | ISBN: 978-1-4012-9380-2

SUICIDE SQUAD VOL. 8: LEGERDEMAIN TP
written by JOHN OSTRANDER and KIM YALE
art by GEOF ISHERWOOD and ROBERT CAMPANELLA
cover by GEOF ISHERWOOD and KARL KESEL
Batman, Superman and Aquaman suspect that Amanda Waller had a hand in the death of Ray Palmer, but when they seek to question the Squad, they find resistance from the Jihad and Hayoth. Can the world’s most dangerous criminals take on a trio of the most powerful Justice League members? We’ll give you one guess! Collects SUICIDE SQUAD #59-66.
ON SALE 05.15.19
$19.99 US | 192 PAGES
FC | ISBN: 978-1-4012-8953-9

HEROES IN CRISIS #8
written by TOM KING
art by CLAY MANN and MITCH GERADS
cover by MITCH GERADS
variant cover by RYAN SOOK
You’ve seen all the clues. You’ve heard the testimony and eavesdropped on the secret confessions of the World’s Greatest Super Heroes. Now, with the killer revealed, it’s time to find out why. What could have driven a hero to the brink, to turn a savior into a murderer? Rifts will form between old allies, and the trinity of Wonder Woman, Superman and Batman will have their leadership challenged and will question their own judgment. Sanctuary has become something they never imagined…and it’s still potentially carrying on without them!
ON SALE 04.24.19
$3.99 US | 8 of 9 | 32 PAGES
FC | RATED T+
This issue will ship with two covers.
Please see the order form for details.

Some yammering and potentially spoilery speculation about Heroes In Crisis behind a cut because it’s only somewhat on topic for the blog.

I’m getting close to the why-are-you-buying-it-if-you-aren’t-reading-it point.

If you haven’t heard of the short story, it reverses the Snow White/evil queen tale into one where the new queen is desperately trying to protect her kingdom from her evil stepdaughter.

NSFW (according to Tumblr): Top 10 Art Posts You Won’t See on your Dashboard This Week

Seriously, these make absolutely no sense. There is nothing NSFW in this list, or that would violate the specific rules given.

Last week I gave up on “The Unexpected” after 5 issues. It was the only one of the New Age of DC Heroes comics that caught my eye. The first issue was good, but after that it just meandered and meandered.

It turns out DC is cancelling it with issue 8.

So I’m down to one DC comic, The Flash, which I haven’t been able to work up any enthusiasm to read since Heroes in Crisis hit.

“The Unexpected” cancellation was not a surprise.

I’m down to 1 DC comic, though I am reading more Vertigo.

In other #comics #amReading, I expanded my thoughts on the Graphic Audio adaptation of #FinalCrisis – and going back to the original and its tie-ins – into a full blog review.

I was already numb to any interest in reading Heroes in Crisis. Having read the list of confirmed deaths in the first issue alone, I’ve changed my decision from “maybe pick up the trade if reviews are good” to “nope.”

I’m tired of any character who isn’t currently headlining a book being one editorial decision away from cannon fodder.

And I’m tired of comics repeating story beats just to repeat them without looking at what made them work (or not) in the first place.

ONI Press has commissioned a collection of online comic strips about voting in each US state, with voting/registration info and links to the official registration sites.

This sounds amazing: BOOM is going to be doing graphic novels based on The Magicians (the books, not the TV show), starting with an OGN next summer focusing on Alice: her life before Brakebills and the events of the first book from her POV.

I’m not familiar with artist Pius Bak, but writer Lilah Sturges is a perfect choice.

On BookToot.Club
(Boosted on Wandering Shop)

I found this old post I wrote on how Marvel or DC would have milked Lord of the Rings as an “event” comic book, with tie-ins, spin-offs, and character spotlights…

…and realized it’s not that far off from what the Hobbit movies actually *did*.

What If…Lord of the Rings had been an “Event” Comic? 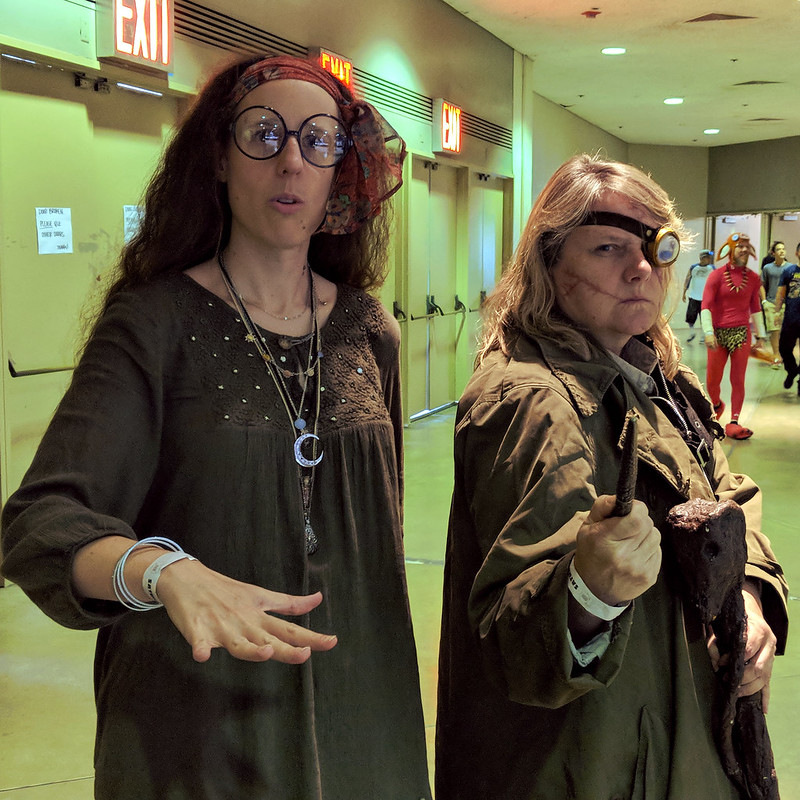 The Man of Steel at #lbcc2018
Full gallery at flickr.com/kelsonv

@lapis @zephasaurus_hex
Some of the #comics I’ve read on that list:

I quite liked the original Elfquest.

Planetary is a fascinating exploration of superhero/scifi tropes, but works best if you know the references.

Transmetropolitan is really good, but not everyone’s cup of tea.

Sandman is epic, but start w/the 2nd collection & go back for part 1 if you like it.

Astro City is a great reimagining of superheroes, hopeful & standing on its own.

@lapis @zephasaurus_hex To clarify with Sandman: It took 8 issues for the series to find its voice. So while the first collection establishes the setting and characters, it’s a very different tone from the rest of the series.

@lapis @zephasaurus_hex Oh, and Hark! A Vagrant! is a lot of fun also, especially if you like literary and historical humor. It’s a collection of unrelated comic strips rather than an ongoing story.

I’ve started listening to the Graphic Audio adaptation of 52, and I can’t get over Booster Gold’s totally surfer accent, dude.

After listening to the audio version, I re-read Final Crisis, Rogues Revenge & Superman Beyond, plus read some of the tie-ins for the first time.

– Superman Beyond is essential.
– Submit (Black Lightning/Tattooed Man) adds a lot by showing the personal impact of the event, plus fills in plot.
– Resist (Checkmate) broadens the scope but can be skipped. (I do like using the captive villain AIs as a way to get around the ALE’s control of communication channels)

Rogues Revenge was in the works before Final Crisis, and it shows. It still works as Rogues: Rebirth, but now I think the FC connections hurt more than they help.

Revelations is a much tighter story that weaves in and out of issues 2 & 3 (if not seamlessly), picking up the Crime Bible & Vandal Savage and showing the early stages of Darkseid’s takeover. I didn’t read it originally, but I’m glad I finally got around to it.

I didn’t re-read Requiem. I still haven’t picked up Rage of the Red Lanterns. (I’d forgotten the Alpha Lanterns were involved in Final Crisis.)

I also didn’t re-read Legion of Three Worlds, which IIRC has nothing to do with Final Crisis except Superman passes through it between Superman: Beyond and his return to Final Crisis when Braniac 5 shows him the Miracle Machine. (3 versions of the LSH, none of which were the one that I actually followed).

I do want to re-read Multiversity now, though.

Finished listening to the Graphic Audio adaptation of FInal Crisis. It actually flows better than the comic, especially toward the end, when the comic starts fragmenting the narrative (which is great metatext, but there’s a lot of “what just happened?”). Scenes are fleshed out, and the multi-flashback structure of the last chapter is made linear instead.

A lot of that is probably the novelization it was based on (it credits the story only to Greg Cox, with no mention of Grant Morrison or any of the artists, which seems a shame), but I don’t think it would work well as a book.

The voice acting, music and sound make up for a lot of the lost visual punch and visual structure of the story, and it needs more than just the words.

One of the weird things about the Final Crisis audio book is that it incorporates *some* of the tie-ins, but excludes the one that sets up Mandrakk. Scenes showing what’s happening to Batman in the Evil Factory are included, and all of the Black Lightning/Tattooed Man story from Submit…but nothing from Superman Beyond. It (or the novelization it’s based on) actually replaces the Monitor who recruits Superman with Braniac 5, sending him off to L3W but not including it!

In Final Crisis, the Anti-Life Equation is able to compel the surrender of free will. Those who have submitted spout slogans about how it justifies anything, how it’s so much easier than the struggles of life and love.

It’s insidious, because in some ways it *is* easier to offload tough decisions to a schedule, a policy, a leader, etc. The brain likes taking shortcuts around cognitive load. But people want to be *able* to make choices when they want to.