I love the fact that we can actually *use* gravitational lensing to see things in space even more distant than our telecopes can, almost as far out as the edge of the observable universe. (i.e. before things are too far for light to have reached us yet at all.)

And find surprises, like this early, early galaxy that looks like it had already started rotating 13.3 billion years ago.
https://www.syfy.com/syfy-wire/bad-astronomy-alma-observations-galaxy-jd1-rotating

Things to remember with Omicron:
1. Science isn’t handed down from on high fully formed. It’s a process of figuring things out based on what you know so far & what you discover. Like trying to determine the picture on a puzzle when the pieces are still scattered around the house.

2. Tactics change with the terrain. When a tool is in short supply, you save it for those who most need it. When it’s widely available, you can use it more. When a risk is both high and widespread in your area, you take more precautions than when it’s lower and rarer.

3. News and advice should be looked at through the lens of “Based on what we know so far, under current conditions.” As we learn more, and as conditions change, that will change. That’s how science works, how learning works, and how time works.

4. Nothing in life is certain. But a 90% reduction in your chances of something awful happening is pretty damn good when you compare it to the baseline instead of that ideal 100%.

Stumbled on this again after seeing it a long time ago:

Photo-realistic renderings of Earth as it might have appeared from space during various prehistoric eras, with different continental arrangements, climate and vegetation (or lack thereof, as in the case of pre-multicellular-life Rodinia).

New round of #introductions for all the new people joining the Fediverse!

Article by Phil Plait explaining the science behind the Event Horizon Telescope’s ground-breaking image of the supermassive black hole in M87 – the world’s first-ever actual image of the event horizon (or, more precisely, silhouette) of a black hole.

Birdsite thread by @AstroKatie on how the image was produced and why the ring looks the way it does, plus simulations of different viewing angles.

First ever direct image of a black hole! The supermassive black hole in the galaxy M87 — 6.5 billion times as massive as the Sun! #EHT #BlackHole The image is better than I expected! pic.twitter.com/Tv7I36v4xQ 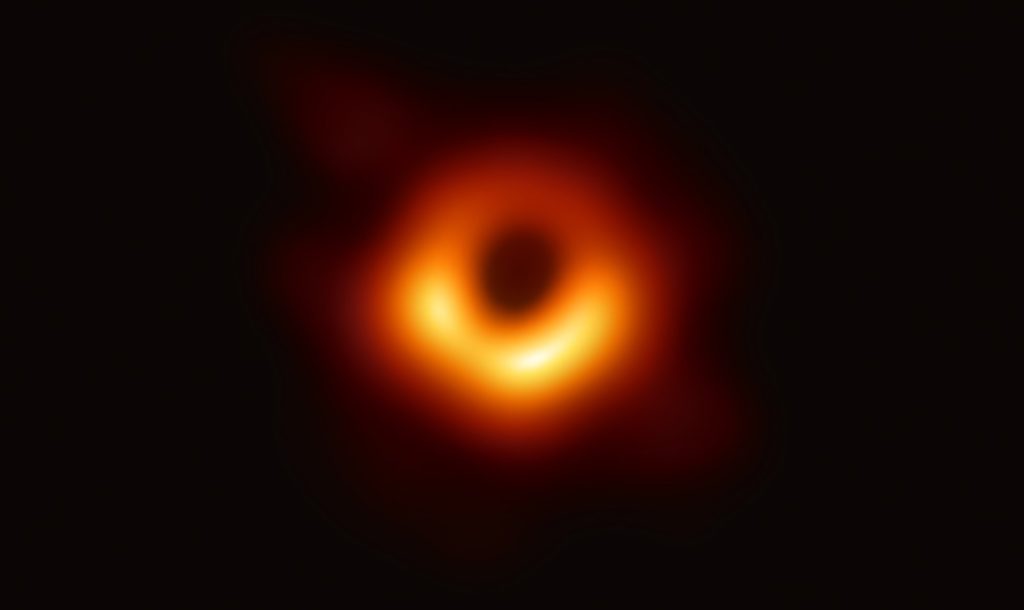 I stumbled on a reference to this story recently. Just as fascinating this time as when I first read it.

TL;DR: Apparitions & anxiety in a lab are traced to infrasound from a fan producing a standing wave resonating at the frequency of the human eye. Vic Tandy went on to investigate whether the same waves were present in at least some sites with haunted reputations.

He died in 2005. I couldn’t find much follow-up research in a quick search.

I’ve been reading through the archives of Maximumble and Minimumble, and hadn’t seen this before. It’s a good one! #science #puns http://minimumble.thebookofbiff.com/comic/58-collision/

Apparently tomatoes have inactive genes for producing capsaicin, so scientists are trying to use CRISPR to activate the genes & create a spicy tomato, figuring it’ll be easier to grow than peppers.

Weird, I was just talking about this a few days ago.

So I noticed Mastodon’s been trending again & figured I’d take another look. I don’t need another time sink, but I figured it might be worth jumping in this time. Now to replicate just the good parts of that other network…

I should probably figure out what I want to talk about here before I try to figure out who to follow, huh? I mean, I’ll probably end up cross-posting photos & blogging (yes, I still blog), but other than that, do I want to talk about…tech? politics? comics? sci-fi/fantasy? I don’t think anyone I know IRL is here, so it’s a matter of topics for now.

Actually, what *is* the etiquette for cross-posting here?

Hmm, looks like I may want to check out wandering.shop for scifi/fantasy and photog.social for photography…

OK, so I’ve set up @kelsonv@photog.social for photography posting. I’ll probably keep this one for other stuff.

I’m all for looking for deeper context. Dietary headlines are pretty much always overly simplistic, and it’s important to consider scale (doubling a tiny risk is still tiny), interactions, and trade-offs (avoiding one ingredient and increasing another beyond healthy levels isn’t going to help).

But ridiculing an organization for saying that sunlight and air pollution can cause cancer? That’s so blatantly dishonest I thought I was reading a satirical quote from the Onion.

Also: Treating the various categories as if they’re all the same. Quick reference: Group 1 means there’s sufficient evidence that something causes cancer. Group 2A and 2B mean there’s limited evidence, so they’re not saying they’re sure. Group 3 means that there’s no indication that it causes cancer, but they haven’t ruled it out.

If anybody tells you something is dangerous because it’s a Group 3 carcinogen, they are either mistaken or lying to you. It might very well be dangerous for other reasons, but Group 3 specifically means they looked at it and didn’t see enough evidence either way.

(I recently saw someone claiming bananas were carcinogenic because of the ethylene gas used to ripen them after they’ve been picked. Ethylene is in Group 3. It’s also given off naturally by plants to do things like…ripen fruit.)

Here’s the actual IARC press release. It still doesn’t describe the scale of the effect they found, but it does at least define what they consider to be “processed meat” (basically anything cured, smoked, etc. so I guess that does include cold cuts). It’s worth noting that they don’t suggest people *stop* eating red & processed meat, but *limit* it, and that that risk/benefit analysis needs to be done to determine the best guidelines.

Aha! Some numbers to indicate the actual *scale* of the risks involved: “In the United States, a person’s lifetime risk of getting colorectal cancer is roughly 5 percent. The IARC says that eating 50 grams of processed meat per day (about one hot dog’s worth) will boost that to about 6 percent.” For comparison, the article cites the lifetime risk of lung cancer at 1.3% for non-smokers and 17.2% for regular smokers – a *much* bigger difference!

I’d seen the 18% increase stat in several articles, but this is the first place I’d found the baseline rate, which is an important piece of information.

It’s an 18% increase for each daily serving, basically. If you assume the average American eats say, three servings of red/processed meat a day (I don’t know) for that 5% risk, then eating four servings daily brings you to 6%, five daily servings would bring you up to 7% and so on. Presumably going veggie or sticking to poultry would drop it to 3%. And that’s not considering confounding factors.

I understand reporting the findings primarily in terms of ratios since different cultures eat different amounts on average and will have different average rates…but at the same time, if you’re in science you’ve got to know that science reporting — and worse, health reporting — is pretty much worthless at trying to find the context. A few countries’ average consumption and cancer rates should have been in the press release.

Click here for more of Jon Stewart’s coverage of the recent House Committee on Science, Space and Technology hearing.

You know the stories about how McDonald’s burgers don’t rot, and therefore must not really be food? Someone did an actual controlled experiment on this to figure out why, and it turns out that it only works with the smallest, thinnest burgers, because they dry out before they start to decay. It’s burger jerky. Try it with a thicker McDonald’s burger, or put it in a plastic bag, and it’ll decay just like “real” food. Homemade burgers behave the same way.

There’s an old children’s joke that goes like this:

“Did you know the word gullible isn’t in the dictionary?”

Then when the other child goes to look it up, you laugh at them for believing you.

On the face of it, it’s a lesson in not believing everything you hear.

But when it comes down to it, the child who goes to look it up isn’t necessarily being gullible; he or she is doing research to confirm their expectations. Yes, gullible should be in there, but let’s make sure. Once you’ve seen a number of dictionaries that all have gullible in them, you can safely ignore the next person who claims that it’s missing, and insist that they put up their evidence.

The child who says, “Really?” and then goes around repeating it? He’s the one who needs a lesson in skepticism.

So the next time someone sends along a bizarre “fact,” especially one intended to spur you to action…dig a little deeper. Sometimes all it takes is two minutes of fact checking to save your credibility. You don’t want to get known as the guy who really did think gullible wasn’t in the dictionary…over and over and over again.

How we know the fireballs over Calif. & Cuba weren’t related to the Russian meteorite or the asteroid flyby. https://slate.com/technology/2013/02/asteroids-and-meteors-why-are-we-suddenly-seeing-so-many.html #SCIENCE

(For one thing, fireballs like that happen once a week somewhere.)

I know this is supposed to be fake science, but that last panel makes a disturbing amount of sense.