Let’s just say the kid was not impressed with Attack of the Clones.

TBH I think it’s the weakest of the prequels and of the 6 that George Lucas was actually involved in.

The Phantom Menace is better than i remember. It’s well constructed, and there are incredible subtleties and thematic elements hidden among the flashy (and cheesy) A-plot.

AotC is…not. I could see what they were trying to do, but it doesn’t hold together as well, and the story hinges on a romance that is, frankly, unconvincing.

TPM is about dualities, symbiosis, and most of all, misdirection. An elaborately costumed decoy queen, an invasion waged to maneuver the Senate into giving Palpatine more power, and so on. And the movie is that too: a big flashy effects and battle and comedy extravaganza in front of a master manipulator quietly going about his scheming.

I mean, yeah, the dialogue isn’t very good, and there are all the horrible stereotypes, but the core of the story is thematically solid.

In more ways than one.

It’s like an early draft of a script went into full-blown production. And no one could tell Lucas, hey, maybe you should try something different here, or keep working on the dialog there, etc.

The effects are amazing, the music’s top notch, there are cool concepts and interesting characters and good actors doing the best they can with what they have. When they can.

And there are great moments too, like Dooku telling Obi-Wan the absolute truth about the republic having fallen under the sway of a Sith Lord, just in a way that Obi-Wan can’t believe it. Or Padme quietly picking the lock on her handcuffs in the background while Anakin and Obi-Wan argue in the foreground.

Mainly I think it needed more script revisions and to let someone else direct it.

I keep misspelling Rey’s name, and now I want to know: is there, somewhere in the expanded #StarWars universe, a character whose name looks or sounds like Shinji to go with her and Ahsoka?

I’ve expanded my thoughts on #StarWars: The #RiseOfSkywalker into a blog post. Spoilers abound.

The Force Awakens: There will always be a new generation of fascists, and people from all walks of life can band together to work against them.

The Last Jedi: Evil will relentlessly work to snuff out hope. Do what you can, even if you’re just some nobody, and you may be able to inspire others as well.

The Rise of Skywalker: It was all zombie space Hitler’s fault. Kill him and we’ll be fine.

That’s really my biggest problem with the Rise of Skywalker. It completely undermines the themes of the previous two movies by making it all about Palpatine – and not even in a good way. Ian McDiarmid was fascinating as the master manipulator in Return of the Jedi & the prequels, but here he wasn’t even a character. He was an obstacle, like a video game boss.

And it changes Rey’s journey as well, from “anyone can be a hero” to “people with powerful families/bloodlines can be heroes even if their families are evil” – which is related, but not the same thing.

I mean, it was entertaining, and they pulled a lot of triggers on metaphorical guns (and literal ones), and there was some amazing cinematography and multi-layered call-backs. I loved the way it evoked the Mustafar battle on Endor, with the elements reversed, for instance.

But overall it’s kind of — we needed a big finish, so we’re finishing it. Hope to see you with the 5 million spinoffs.

Agh, sorry for rambling. I was going to just post the themes, which is something I’ve been thinking about for a few days now, and just kept writing 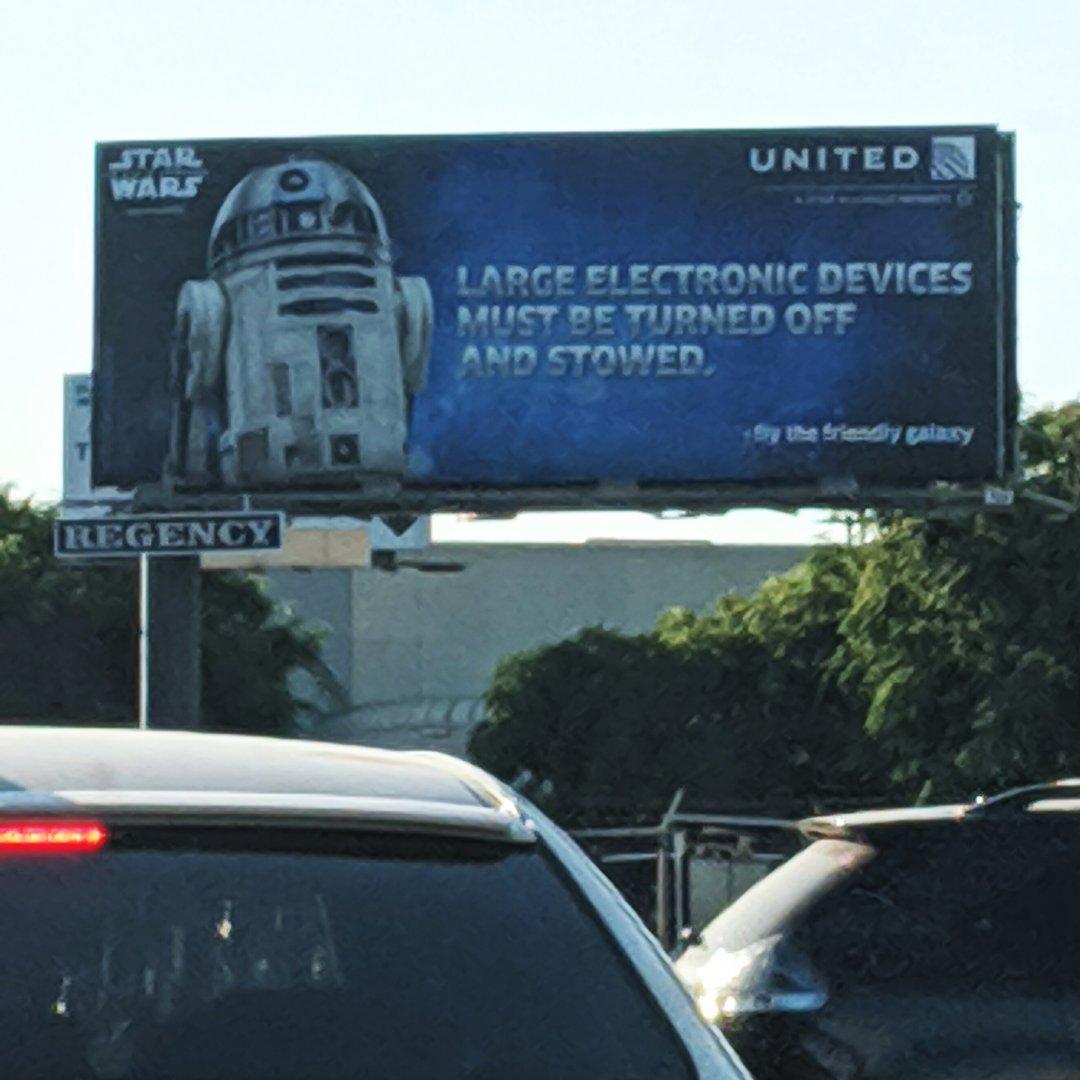 Spotted this billboard near the airport. 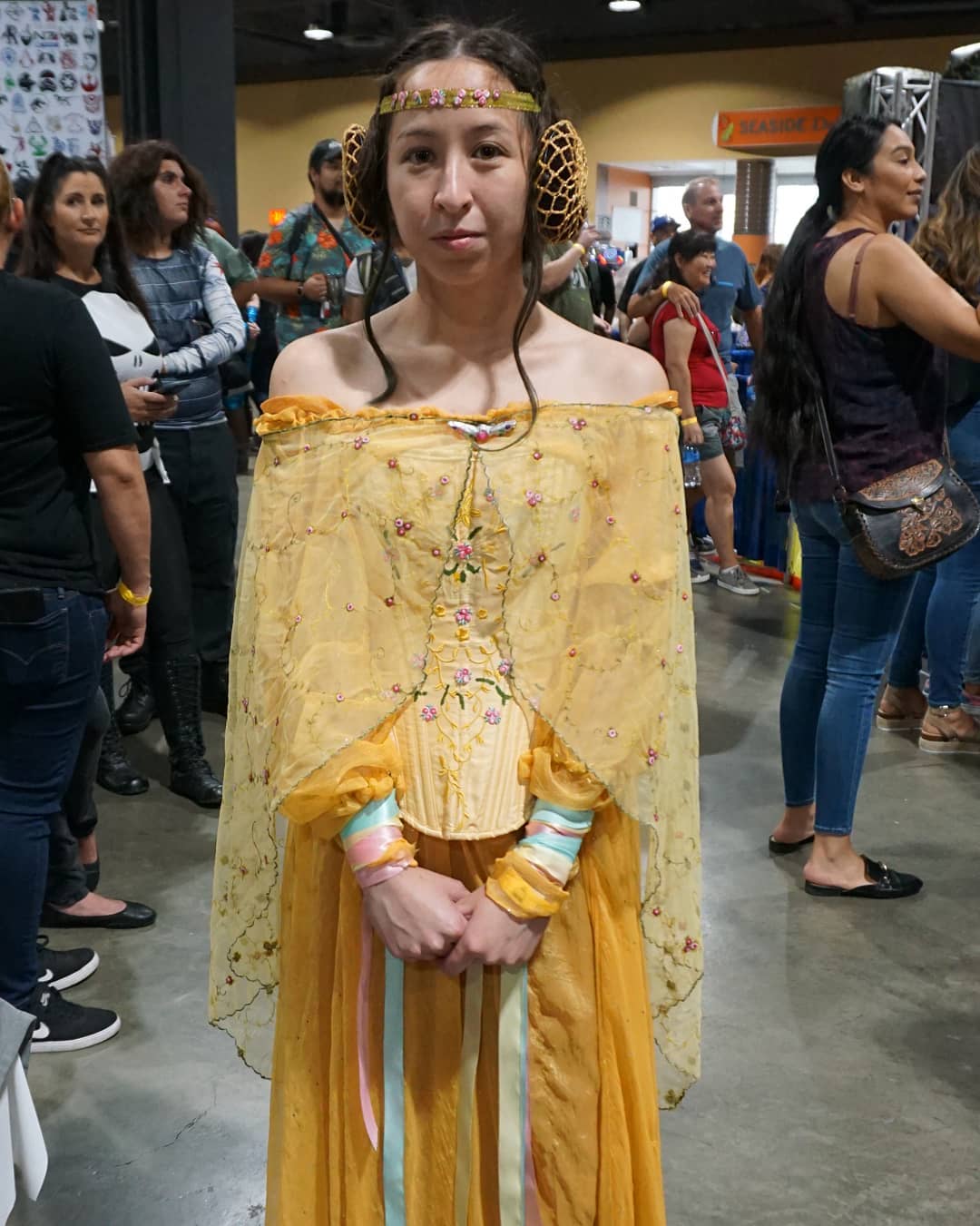 Senator Padme #Amidala back home on on Naboo – or is it @LongBeachComicCon ?

I keep thinking of The Last Jedi. The first time through was grueling, watching the relentless assault of the First Order as it tried to snuff out every last bit of hope. The scenes with Rey and Luke were a relief because he was “only” depressed, not doomed.

But Luke eventually regains enough hope to take action. And enough of the Resistance is able to survive, keeping the spark of hope alive. And their legend survives, passed from Rose & Finn to a stable boy on Canto Bight, who’s already fanning that spark.

The whole movie is about hope: whether you’ve lost it or someone is actively trying to stomp it out, as long as it exists, you can hold onto it. That hope that, to quote another trilogy, “There’s some good in this world, Mr. Frodo, and it’s worth fighting for.” 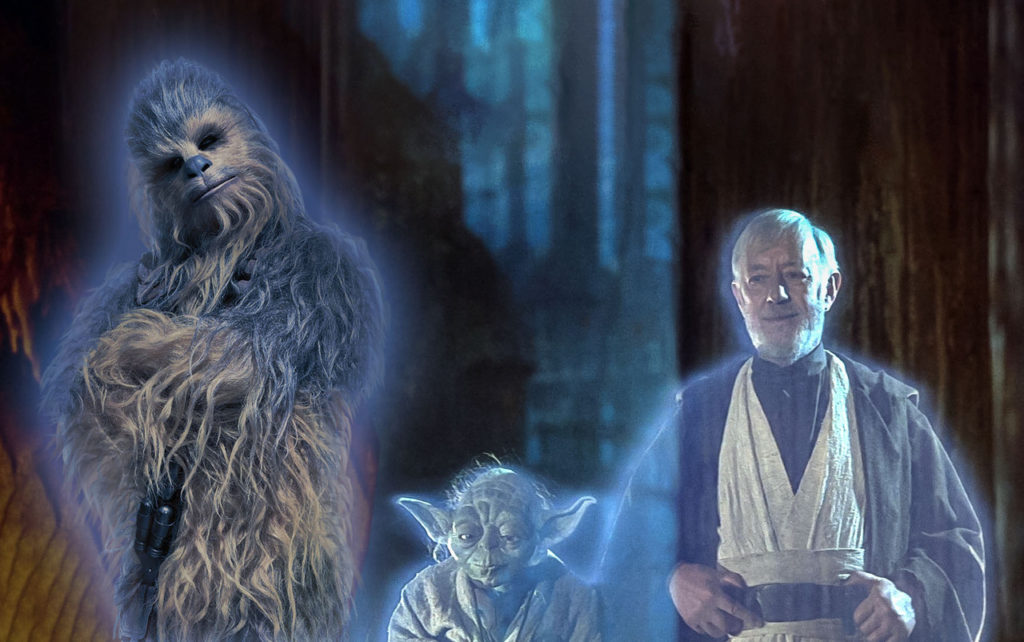 Almost everyone who encountered Peter Mayhew claimed he was one of the kindest people you’d ever meet. In the same realm of Tom Hanks, Mr. Rogers, and Bob Ross.

He loved being a part of Star Wars. He was famous for using his special custom lightsaber cane. 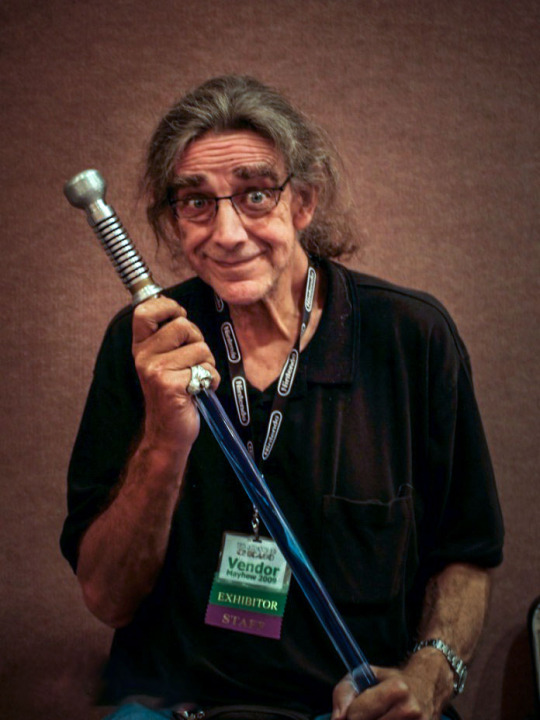 Despite being in a lot of pain, he went to as many conventions as possible to meet people. You could tell his love for Star Wars fans was genuine.

Mark Hammil wrote a touching tribute to him.

“He was the gentlest of giants. A big man with an even bigger heart who never failed to make me smile & a loyal friend who I loved dearly. I’m grateful for the memories we shared & I’m a better man for just having known him. Thanks Pete.” 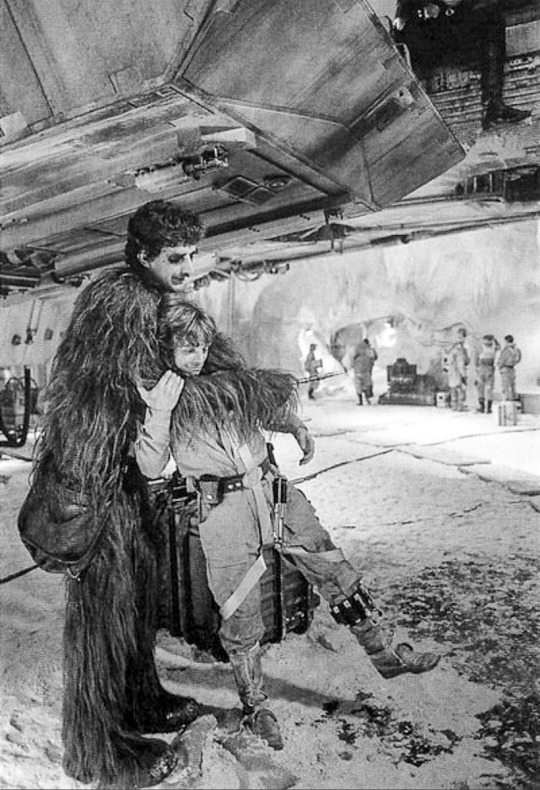 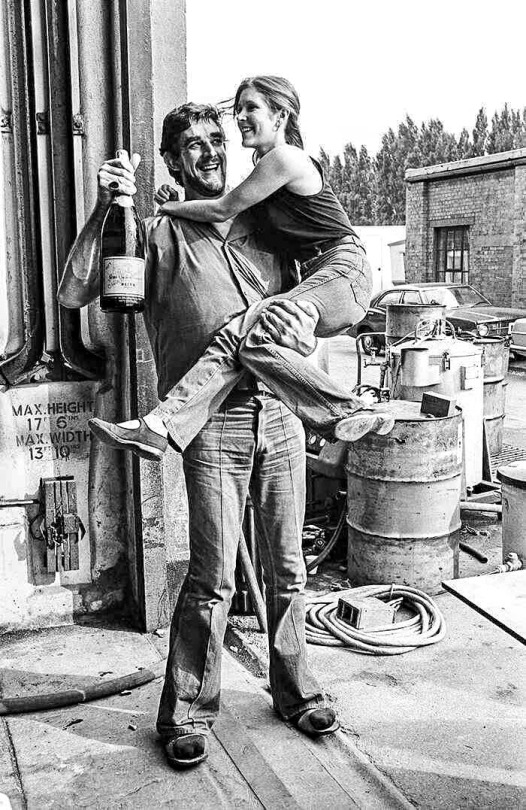 If you are in some sort of pleasant afterlife, I hope they finally gave you the medal you totally deserved. 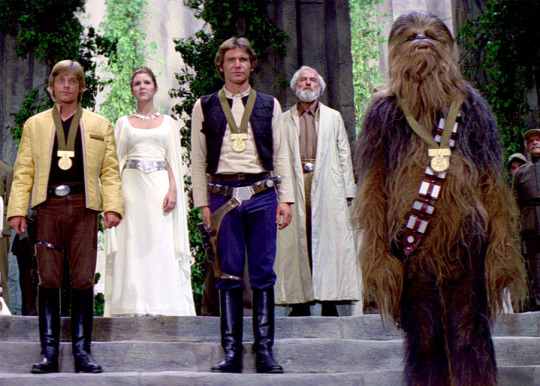 What is Yoda’s syntax in other languages?

What does Yoda’s syntax look like in non-English versions of Star Wars? For those who aren’t familiar with Star Wars (all two of you), Yoda is an alien who, when speaking English, uses what seems to be an OSV syntax instead of the traditional SVO syntax.

So how do foreign translations of the script handle this? I am particularly interested in what it looks like in non-SVO languages. Are there any translations where Yoda’s incorrect syntax is emulated by using an English-like syntax? Or are other languages’ syntax so free that mistakes in the use of case or verb conjugations must instead be used to emulate Yoda’s “alien” speech?

And some answers so far: 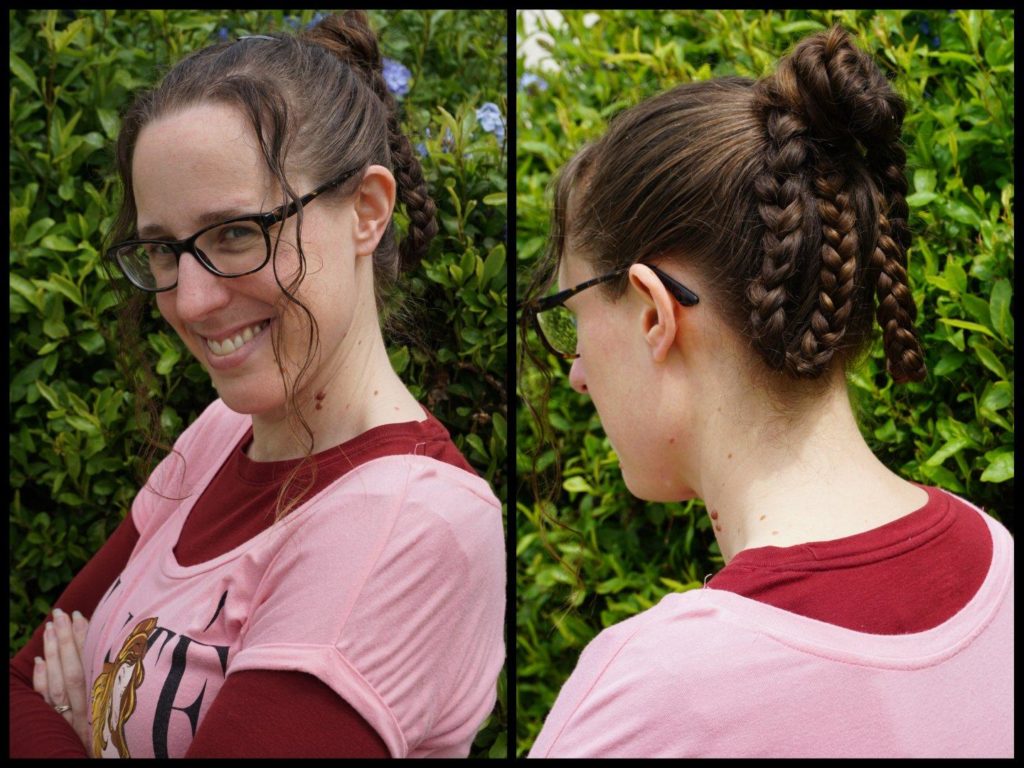 May the Fourth Be With You.

May the Fourth Be With You! @CasualCosplayKatie: Easiest #princessleiahair by a long shot. Now with full ‘bound outfit (even if I’m not bound anywhere today)!

I’m not as excited about the title, TBH, but then titles have never been Star Wars’ strong suit.

I learned long ago that “things happened that I didn’t like” and “it was badly made” are two different complaints about a movie. And while a lot of stuff happened that I didn’t like, it was interesting and creative in a way that Star Wars hasn’t been able to be in decades. We knew where the prequels were heading, we knew where Rogue One was heading, and The Force Awakens followed essentially the same plot beats as A New Hope.

It’s dark, yes – but not really much darker than Revenge of the Sith, another film that features the slow, inexorable snuffing out of hope by a powerful galactic-sized force, leaving only a handful of heroes at the end. But with RotS, we knew things would get better (eventually). This time, we get a triumphant return at the end, and a hint at a better future in the epilogue.

The Last Jedi made it possible for Star Wars to be surprising again, and unless Episode IX goes out of its way to reject it (or even if it does), I suspect it’ll be received better in the long run than it has been in the moment.

@Jo Oh, geez, I remember writing a “How the Hobbit will/won’t be like the SW prequels” post ages ago.

It turned out a lot more like the SW prequels than I’d hoped.

But then I’m the weirdo who still thinks the prequels just needed better direction and someone who could tell Lucas to drop or rethink some of the ideas that just didn’t work.

@Gargron That always bugged me as unnecessary. When we see him in Return of the Jedi, he’s 20 years older anyway and probably using the Dark Side to prolong his life like the One Ring and Gollum.

But I guess Lucas wanted to go with the thematic revealing-his-true-face thing. 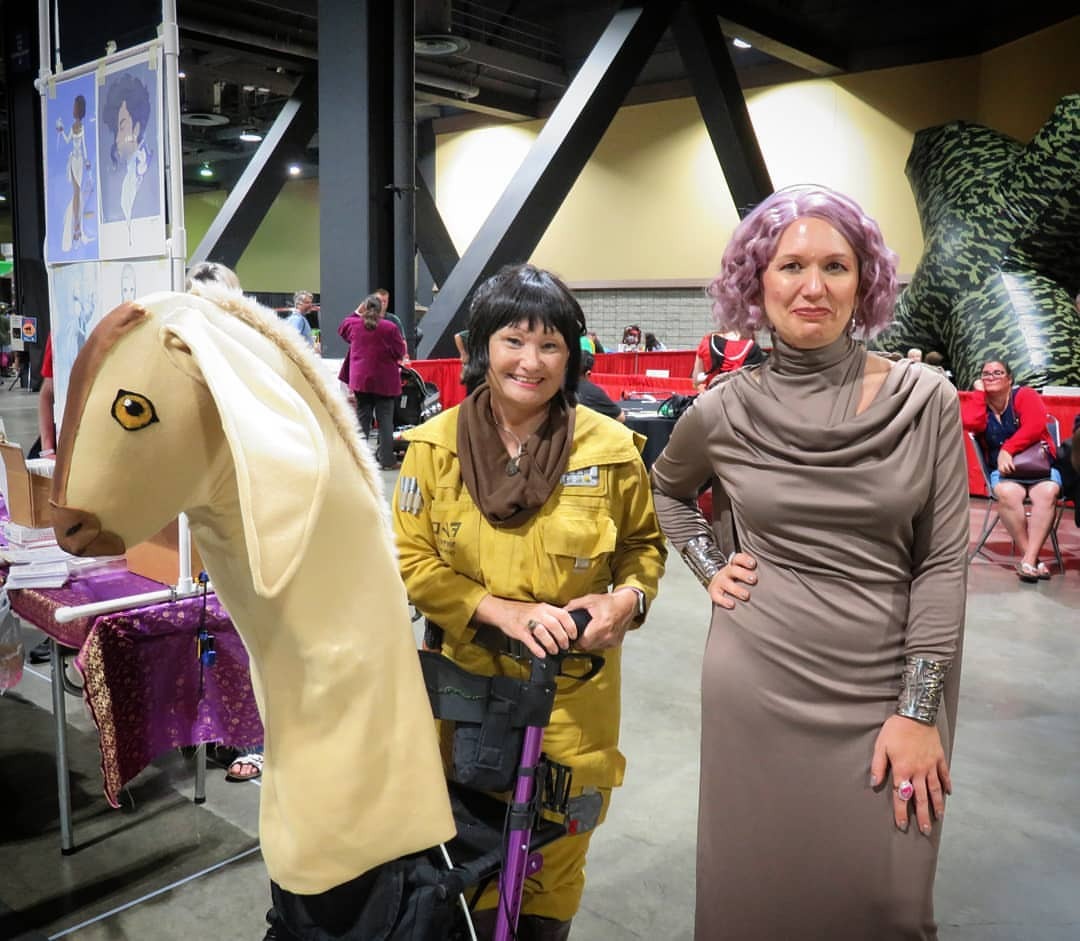 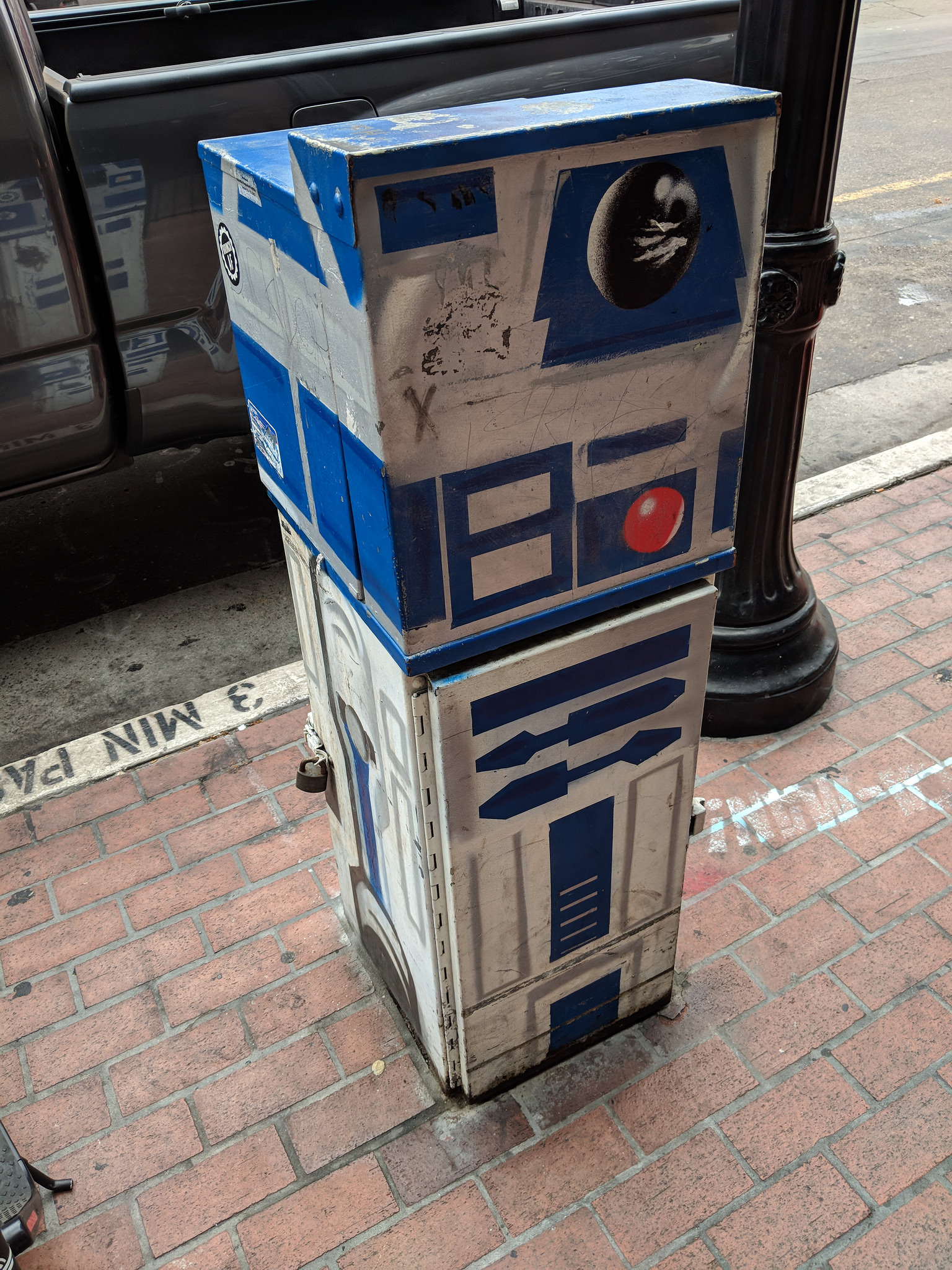 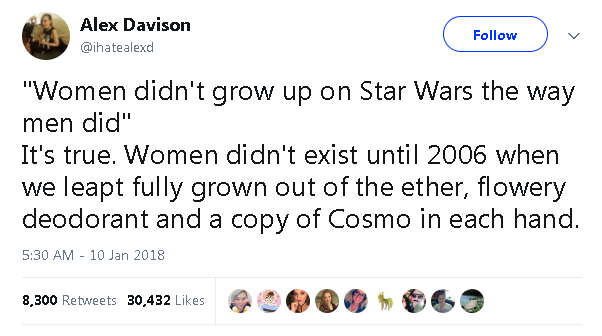 Now, keep in mind: there was no internet to search for images.  She could not have rented and paused the movie, because it wasn’t released on video until 1982.  No, TJ just went to the movie a bunch of times, took notes with a flashlight, drew a bunch of sketches, and put this together.

In 19-fucking-77.  So let’s bury this bullshit about how women didn’t grow up on Star Wars.

Some dude tried to explain why TLJ is an insult to real fans and since I liked it I wasn’t a real fan and SON, I GOT A DOT MATRIX PRINT OUT OF Star Wars: New Hope, The Journal of the Whills, Part 1 IN A DRAWER SOMEWHERE, COME AT ME.

My mother is 74 years old and knows what a Corellian blood stripe is. The ladies have been here the whole time.

Building under (severe) renovation near LAX. The Solo movie posters are still up on this side of the construction wall, though the posters around the corner were replaced with Mamma Mia today.

On PixelFed
Expanded on K2R