For half of what they paid for them. 🤦‍♂️

To a private equity firm. 😬

Flickr and Tumblr REALLY lucked out that Verizon put in the effort to look for a photo-sharing company and a blogging company to sell them to instead of just muddling along with no idea what to do with them until they just wanted to unload them.

Thoughts on Tumblr’s Escape from Verizon to WordPress

Wow. Automattic bought #Tumblr from Verizon for less than $3 million.

Considering Yahoo bought it for $1.1 *billion* back in the day…

Yahoo really squandered it. And Verizon, I think, just wanted to get rid of it.

At least it’s going to an actual social media company instead of another conglomerate. I was half expecting Verizon to try to monetize it into the ground and close it once everyone but the die-hard users had given up on it.

Wow, that shoe dropped sooner than I expected. Verizon is *already* shopping around to sell #Tumblr. I figured it would be toward the end of the year.

Verizon is looking to sell Tumblr after squandering its potential

I backed up all of my original Tumblr content in December, and I’ve imported a few posts to my blog. And I started paring down what was left.

As I said back in January:

“It’s clear that Verizon has even less idea what to do with Tumblr than Yahoo! did. When they finally give up trying to monetize what’s left of the user base, they’ll have no incentive to keep it going. Or to respect all the user data they’ve amassed.”

Here’s hoping Tumblr finds a suitable buyer who understands what they’re getting and is willing to invest in the community, not someone who just wants to squeeze out the last few drops of monetization before sending it to join GeoCities in the great Internet Archive in the Sky.

Expanded on K2R: Verizon is Already Trying to Sell Tumblr
Link on Twitter
Link on Tumblr

Last month, Tumblr and Flickr both announced policy changes that upset a lot of users. Flickr announced that they’d be shrinking the storage offered to free accounts while adding features to paid accounts. Tumblr announced that all adult content was going to be banned, and immediately set about flagging posts and accounts. In the clumsiest way possible. With a lot of errors…

This is promising: SmugMug has bought Flickr & plans to “maintain Flickr as a standalone community of amateur and professional photographers and give the long neglected service the focus and resources it deserves.” (quote from article)

Now I don’t have to worry about Verizon shutting it down!

Exclusive: Flickr bought by SmugMug, which vows to revitalize the photo service

Nice to see Tumblr finally got back on board with #NetNeutrality. They’d been awfully quiet about it after the Verizon acquisition.

Tumblr has an awesome post up, and will send users a notification urging them to take action for #NetNeutrality! 🚨 The internet needs you 🚨: You’re up again, Tumblr.

I doubt Verizon’s planned $2 “convenience charge” for 1-time bill payments is a cash grab. More likely it’s to get more people on auto-pay.

Consolidation in the Telecommunications Industry – Graphic

AT&T’s proposed $39 billion purchase of T-Mobile USA would cap two decades of deal making that has left the U.S. telecom industry with just a handful of major players. Today’s AT&T…

The US government broke up the AT&T monopoly in the early 1980s, leaving the original AT&T doing little more than long-distance service. NYNEX, US West, Pac Bell and the rest were all separate companies until they started buying each other up again.

Looking back at it, what I find weird is that while Pacific Telesis ended up as part of AT&T, and MCI ended up as Verizon, their wireless divisions ended up owned by the opposite companies. 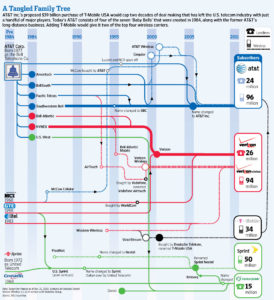 Now I know why AT&T's website couldn't figure out whether our future address can get U-Verse. The city's phone service is handled by Verizon. (And yes, FIOS is available!) You'd think someone would program it to say, “Sorry, AT&T does not service this area” instead of, “I don't recognize that address. Would you like us to research it and get back to you in 2 weeks?”

Given Verizon’s success with the data-intensive Droid series, why does anyone think the iPhone is going to take down their network?

I wonder if Lucasfilm will try to assert trademark over the Motorola/Verizon Droid?