It’s over, Magma Cube! I have the high ground!

Finally got #Valhelsia running on #Linux again. Since CurseForge partially closed their API, MultiMC no longer downloads the mods from CurseForge at all.

The CurseForge launcher doesn’t even support #Minecraft on Linux.

Someone suggested
ATLauncher, which does run on Linux, and works around the CurseForge API by downloading the mods it can, then pointing you directly to the remaining mods to download manually.

Downloading 2 was a lot easier than several dozen!

Kid playing Minecraft with his friends: “I just broke an anvil naming a cake.

I named it ‘Lie.’”
On Wandering.shop

Oops, I forgot to include the link. It’s from the next bugfix release for Minecraft.

I like #MinecraftEarth, but it didn’t quite hit its stride before the pandemic, and didn’t adapt as well as Pokemon Go has *to* the pandemic. I mostly stopped playing after I hit the level cap because gameplay was still too awkward, and it wasn’t *enough* fun to overcome that when I didn’t have a goal to work toward.

So while I’m sad that it’s shutting down later this year, it’s more “what could have been” than wishing I could keep playing it.

Adventuring in AR is the obvious highlight. The main problems are that (1) it requires space, which not everyone has right now, and (2) you can’t choose the *type* of adventure when you activate one, only the complexity. So you’re never sure if you’re going to get a puzzle, a battle, or just a lot of blocks to mine.

Build plates are a cool idea, but the space is very limited, and actually building them in AR is awkward. Sometimes I think it would’ve been nice to be able to build in standard Minecraft UI, then play them in AR. Plus when the pandemic hit, that ruined the plan to let you share the build with other players.

I ended up mainly using build plates to farm. It’s cool that you can, though! Crops and trees grow, you can milk cows, shear sheep, etc. All on your dining table!

Good on them for releasing the rest of the finished-but-unreleased content, discounting what’s there, and giving us time to play the new stuff before shutting down. Plus transferring purchases and character items to Minecraft proper.

Try out snapshots in Minecraft Java Edition:
– change the version in the launcher
Go back to stable:
– same

Try out betas in Minecraft Windows 10 Edition:
– Log in as someone Microsoft knows is an adult
– Sign up for Xbox Insider
– Sign up for the Minecraft beta
– Update your MS apps
Go back to stable:
– Leave the beta
– Back up your save files, are buried deep in a hidden folder with cryptic names
– Uninstall Minecraft from EVERY LOGIN on the computer
– Reinstall Minecraft
– Restore your saves

As near as I can tell, the Microsoft Store will only download the application if it’s newer than a version that’s already on the computer. So if the beta is newer than the stable release, and the beta still exists somewhere on the computer, it’ll just use that one instead of re-downloading it.

No kidding! I haven’t dug into the inner workings of the windows app store, but it really seems like something that came out of the mobile/console ecosystems. Plus it’s never clear how much is installed per-system or per-user, as this beta fiasco showed!

I’m just glad I’d already found out that uninstalling the app deletes all your worlds before having to uninstall it on the kiddo’s login.

Come to think of it, it’s inexcusable that there is literally no way to reinstall a borked copy of the game and keep your potentially *years* of progress on a world without manually digging into $homedir\AppData\Local\Packages\Microsoft.MinecraftUWP_8wekyb3d8bbwe\LocalState\games\com.mojang\ and making a copy of your saved games before you uninstall it.

Something like “Saved Games” for saved games would be nice! Kiddo found this image somewhere and wanted to put up a few signs.

#Minecraft released an April Fools snapshot where putting a book in a nether portal turns it into a portal to a new dimension based on the book’s contents. Some have been designed, and otherwise they’re generated randomly.

According to the video the kid is watching, “message” gets you a world with a giant message, written in flames, saying “WE APOLOGIZE FOR THE INCONVENIENCE”
#hhgttg

Oh nice, #Minecraft Earth has introduced a way to access adventures at home!

9YO joking about Ender Dragon Chow:

“Made from their favorite food!

Ok, I’ve got to appreciate this network error #UI from #MinecraftEarth. Especially the button text. 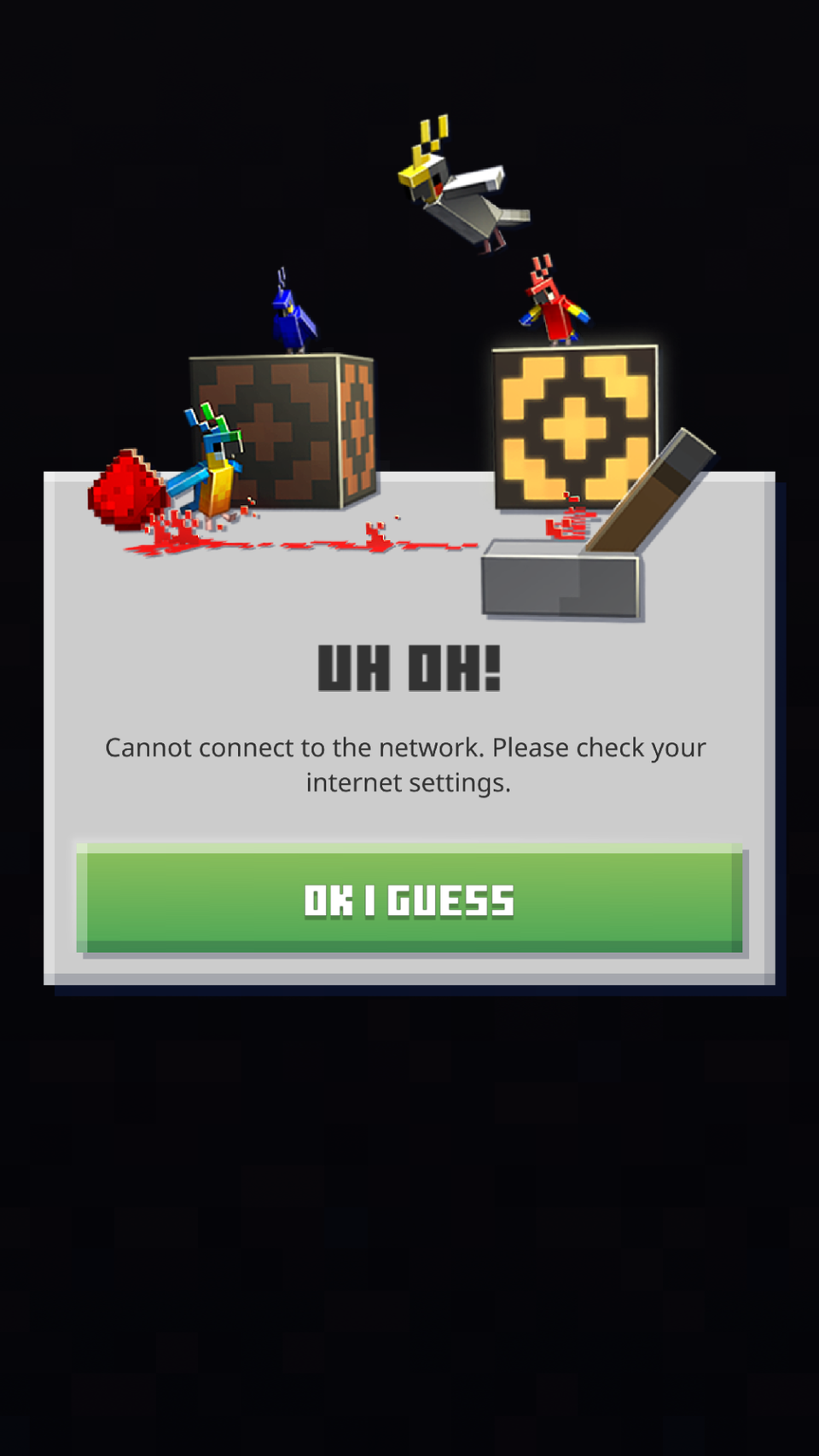 Took Minecraft Earth for a spin around the block. Most of the demos I’d seen showed either the build-on-a-plate mode or the AR adventure mode, so I wasn’t sure how the map mode was going to work.

You see a MC-ified version of your local map, with buildings raised 1 block so you can see where they are, but you don’t have to worry about location mismatches between real walls & doors and virtual ones. Clusters of resources appear on the map: trees, boulders…

…mounds of dirt, etc. along with sheep, cows & other mobs wandering around. You can tap on them repeatedly like you’re mining in the original game, and after a few seconds you get the mob, or the logs, stone blocks, dirt, flowers, etc.

You can use these resources to craft items w/familiar recipes, but each item takes *time* instead of a shape. So it might take 30 seconds to turn a log into planks, or 3 minutes to make a sword.

There are 3 slots for the crafting table & 3 for the furnace, with one each unlocked at the beginning of gameplay. I’m guessing you unlock the others in exchange for the rubies that you collect along with resources.

Resources seem to regenerate quickly – I saw them pop into existence a couple of times on my walk around the block, and there was already a new tree when I got back where I started.

…to interact with, and whenever something crosses that circle, the phone will vibrate briefly to let you know.

A nice touch: If you’re moving faster than walking speed (or if it thinks you are due to GPS drift), it shows you in a minecart!

Adventures are a bit weird: At certain spots, you can jump into an augmented-reality instance (the one I tried was roughly a 5×5 block column) with items you’ve crafted & fight zombies, find treasure chests, etc.

It’s cool, but because you can’t physically move up or down, just around, it’s sort of like walking around a hole in the ground and trying to mine/fight/etc. stuff way below you.

Anyway, I’ve spent longer writing about it than playing so far. I’ll have to take some time to really explore it and get a better sense of the gameplay.

But it’s definitely a different experience than Pokemon Go, and not just a rehash with a different theme! 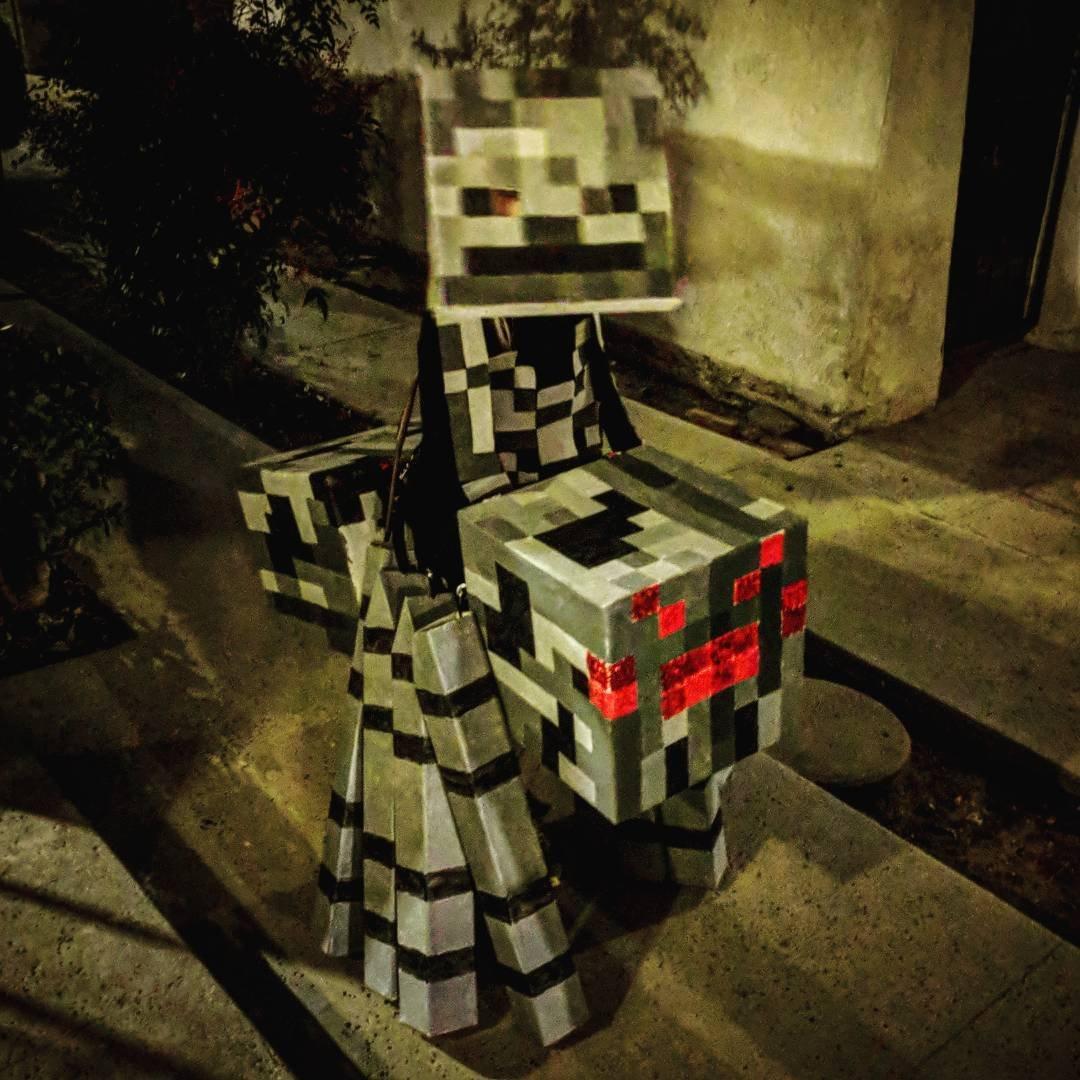 Kid's homemade #Halloween costume: a #Minecraft spider jockey. His mom did the construction, I helped a bit with the painting, and he's still able to fit in the harness, so he's planning to take it out again this year. Building the thing was a lot of work, but he's getting a lot of use out it.

Minecraft: [Player] was shot by Arrow

Me: YOU HAVE FAILED THIS VILLAGE!

When you see it… 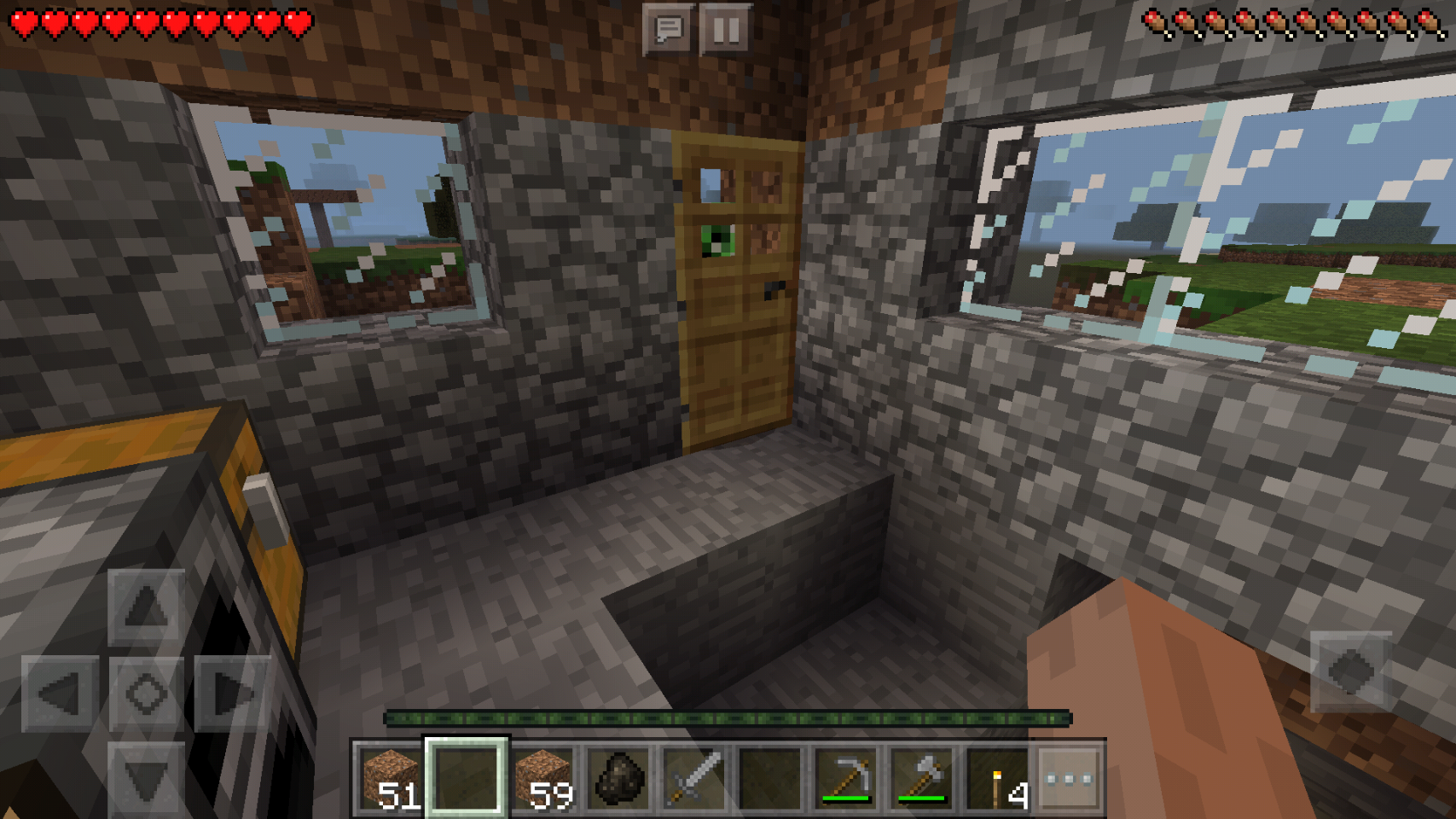 For the record: it works!

If you upgrade a #Minecraft world to the Village and Pillage update and find that the villages you’ve already explored have suffered complete economic collapse, leaving all your villagers unemployed, you *can* craft the new job site blocks, place them in the village, and watch the villagers rediscover how to do their jobs (and trade with you using the new trading mechanics).

And now, back to Minecraft, where I plan on building all the workstations for the new villager professions and placing them in the village near my current base, because after upgrading to the Villager & Pillager update, the entire village is unemployed.

Took the 8YO to Minefaire, a traveling Minecraft convention. Entered the costume contest with the Spider Jockey costume. He made it to the final round! But competition was strong, and he didn’t place. 😞 (Winners were an Iron Golem, Alex riding a wolf, and a Pandacorn, all of which were impressive.) He was really disappointed.

I was mostly support for the kid’s #Minecraft costume, but I did get a chance to check out art, buy from small vendors & photograph #cosplay with the new camera.

The kid only took 1 photo, but it made be rethink my technique.
https://hyperborea.org/journal/2019/04/wondercon-2019-cosplay-photos/

Here’s the family as Professor Trelawney and a spider jockey. She ran into a LOT of other #HarryPotter cosplayers: 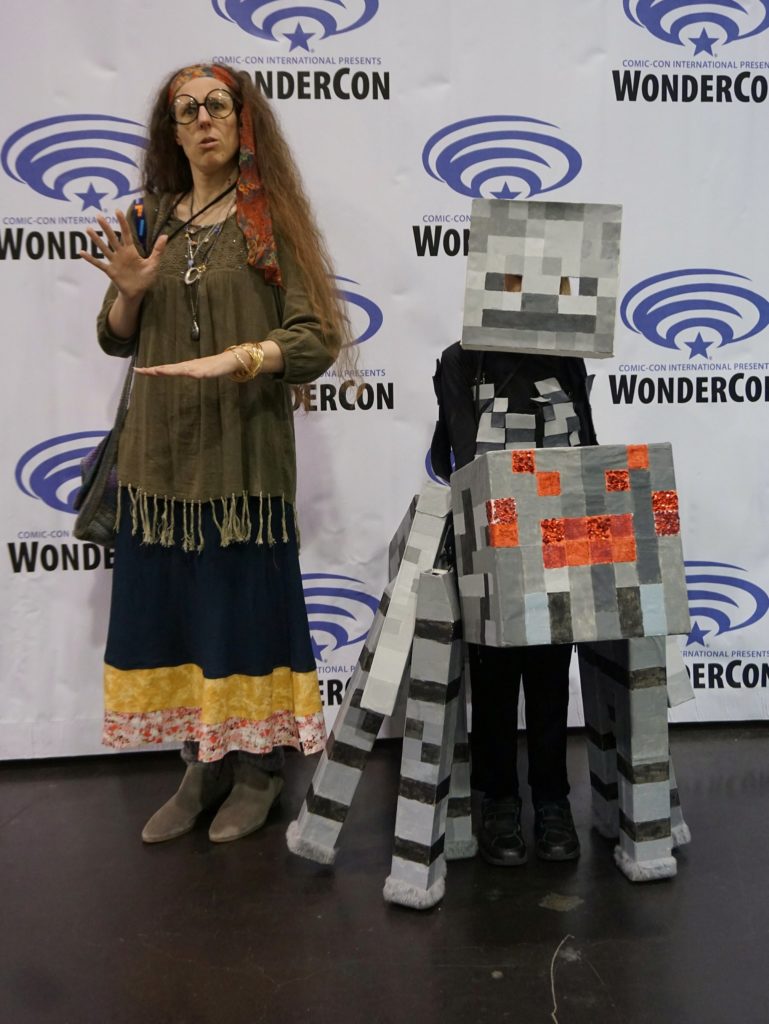