I’ll be able to get used to the new inventory setup, but right now it’s just a matter of adding enough tech slots that I can move over the tech that I used to have in general.

I did, however, get hit by an annoying bug. When I picked up items from frigate missions, it kept adding items to full inventories instead of flipping over to the next one. So I ended up with items that I couldn’t see, couldn’t use, couldn’t move…but I could sell them.

Unfortunately this included some upgrades to the living ship, and the new stacking behavior means I’d have to fill the invisible stack before it would start putting them somewhere I could use. 1/2

Someone on the #NoMansSky forums had figured out a workaround: It’s not just trade terminals that can access the invisible slots, refiners can too…and you can put anything in a refiner, take it back out again, and put it in a *real* inventory slot!

Unfortunately, you can’t put stuff directly from the freighter into a refiner. I got back my stuff from the imaginary exosuit slots…but not the living ship upgrades.

I sold them to clear the stack from the bad slot. 🤷‍♂️

Too tired to find the right place for this, noting it down here for the moment.

On #GitHub, mobile #Firefox, at least with my settings, is not showing the “Code” drop-down button that includes the URLs for cloning a repo.

Sure, i can construct it manually, but it’s more convenient this way.

Firefox on #Android doesn’t. (Tablet+keyboard+SSH client is decent for remote building at least)

Gotta look up where to file a bug report. Tomorrow.

@Fixato confirms it and finds a related blog post

Interesting…it’s not quite the same – I was trying to copy the clone URL to paste into an ssh app, and it showed the Fork and related menus just fine on my tablet screen.

But asking for the desktop site *does* work! Even if it looks otherwise identical to what I was seeing on the “mobile” version because the screen’s big enough!

I guess large tablet screens on mobile OSes are kind of a gray area as far as whether the experience is properly “mobile” or just portable!

How to find stuff…
https://hyperborea.org/tech-tips/find-it/

I wrote up what it takes to add simple #darkmode support to a site so it can have a light theme on light-colored screens and a dark theme on dark screens (and not blast your eyes out).

I wrote up what it takes to add simple #darkmode support to a site so it can have a light theme on light-colored screens and a dark theme on dark screens (and not blast your eyes out).

And <picture><source><img></picture> to swap out images to fit different schemes.

On that note, anyone know how to test this in Chrome or Safari without changing the system theme?

Hot Take: Any installer that checks to see whether the same or newer version is “already installed” should either be really thorough about what it’s checking, or offer to do a repair install anyway.

Finally wrote up the saga of trying to uninstall and reinstall Google Drive for desktop after it crashed during an update, and my attempts to fix it making half of the icons on the Windows taskbar invisible, and what finally DID fix it.

Ugh .. i wish things wouldn’t auto update while I was already straining my CPU temperature.

Fortunately I’d saved my game 10 seconds before the system shut itself down.

And of course the installer that ran wasn’t done, so it’s in a state where the service won’t run, won’t uninstall, and won’t reinstall. Even after deleting files manually.

I’m going to have to run regedit, aren’t i?

Heck with it. I don’t use this that often. I can pick it up another time and get back to my game for now

It. Crashed. During. Save.

Fortunately, No Man’s Sky seamlessly picked up my previous save.

Hot take: Installers that detect whether the program is already installed SHOULD OFFER TO REINSTALL ANYWAY.

System Restore failed and left the system in a state where only manually-installed programs have icons in the taskbar, and anything installed from the Microsoft Store shows a blank button. This is freaking ridiculous

Created a new restore point. Going to try reinstalling now, and then going to bed whether it works or not.

This is not how I wanted to spend Saturday evening.

Yay, it reinstalled. FINALLY. Mounted to a different location, but who cares, I can fix that whenever.

On Wandering.shop
Expanded and parceled out on Tech Tips: Drive Reinstall and Taskbar Icons, and Drive Update Fail on K2R

If I had more time, I would have written a shorter stylesheet.

That said, 3.6K is awfully short by today’s standards.

And it automatically adjusts for display sizes from phone portrait to widescreen monitor, light and dark themes (so it doesn’t blast your eyes out if you open it on a dark themed desktop), and switches the main font between serif on high-density displays and sans-serif on low density displays for maximum readability.

This stuff doesn’t require half a megabyte of frameworks and JavaScript to implement.

Oh yeah, link so you can see it actually works https://hyperborea.org/tech-tips/
At least on modern browsers.

I guess the next step is to test in older ones to see how they handle the mix of media queries. I don’t care if it doesn’t look perfect on the older browsers, but I do want it to be readable!

How did I miss the camera I usually carry around for wildlife when I updated to DST?

I could have sworn I got this specific one first!

Here goes: I’ve taken the troubleshooting posts that I already put on #gemini and set up a web mini-site with them. I figure on adding more as I go along, redirecting some blog posts and linking others.

Digging deeper into #IndieWeb and #Eleventy/#11ty, trying to make it both light and responsive, and building a reusable template setup.

I don’t remember exactly how I set that up, but I’ll see if I can configure a fresh profile and write it down this time!

What I remember: I either pasted a gemini: url into the Firefox URL bar or clicked on an actual hyperlink to a gemini: url and it asked what application to open it with.

Firefox also has a per-website security setting on whether a website is allowed to open links in other protocols.

Yeah, that’s basically it. Paste the URL into Firefox, choose the application (either from the list or from the file picker), and check the “always…” box. Then gemini: links in web pages will open the confirmation box and you can click always-allow per site.

I’ll write this up on the #gemini capsule too! 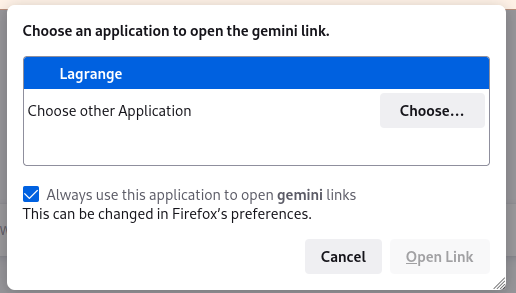 Here it is: opening #gemini links in your preferred client from Firefox.

Wrote up a guide for telling Gnome what a .gmi file is so it can recognize gemtext on a network share where it’s not checking the file contents. This had the added bonus of letting me define Lagrange as the type’s default app and gedit as an alternate.

Spent a good chunk of time last night & this morning (post-windstorm) trying to fix a broken boot loader on my desktop. (Pro-tip: when power’s flaky, make sure the computer is *off*, not just asleep.)

I figured out pretty quickly that UEFI was missing an entry for the Linux install, but since manually creating boot entries in UEFI isn’t something you do very often, it took me forever to find the right steps to fix it.

How to disconnect OneDrive on macOS from an extra account that doesn’t exist anymore.

Huh. So you can’t reformat an encrypted SD card from an old Android device on a new one (if you just want the extra space, and don’t need to recover the contents because you have them elsewhere). It just won’t even offer. You can mount/unmount, decrypt (except you can’t), and that’s about it. Unless this is a Samsung Special removed-the-UI-from-settings thing.

But you *can* plug it into a PC and reformat it there, then put it in the new device and encrypt your new, empty extra storage space.

On Mastodon.social
Expanded on Tech Tips

Redirecting to HTTPS with Let’s Encrypt